Greetings Campers Extraordinaire One and All,

It’s Friday for you, Thursday for me and I’m tired.

I need lots and lots of coffee.  Had to go out to the base this morning, that was an interesting trip.  I won’t say it was a waste of time, because, of course it was nice to get out of the house, but… yeah … you get it.

Anyway, not much else going on around here.  Supposed to be windy and rainy between now and Sunday.  At least it’s supposed to warm up so that

will be a nice change.  I can’t believe this is actually May with as cold as it’s been.  Frost warnings and freeze warnings and the like.  Oh well.  It’s like they say here in Indiana (and in so many other places, I’m sure), if you don’t like the weather, wait a minute.

And with that dear campers, let’s get on our way to funnier things, shall we?

For those of you too young to know what that is, it’s a Singer Sewing Machine.  Sheesh!

You don’t really realize how old you are until you sit your ass on the floor and then try to get back up.

Boy, ain’t THAT the truth!

Honey, it’s the same for all women.

People should seriously stop expecting normal from me.

We all know it’s NEVER going to happen. 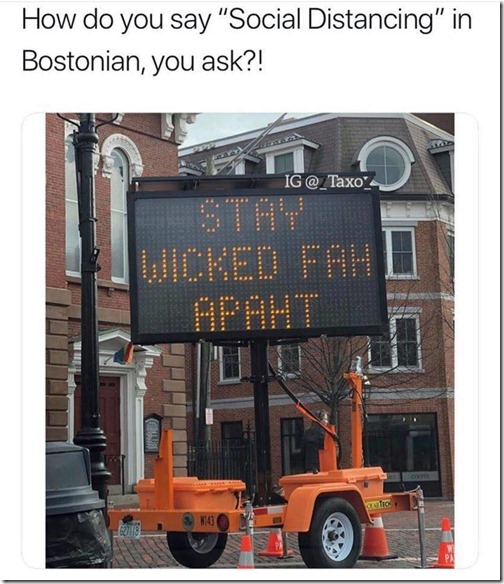 Paddy was selling his pet python on ebay.

Some bloke rang him up and asked, “Is it big?”

The blokes says, “How many feet?” 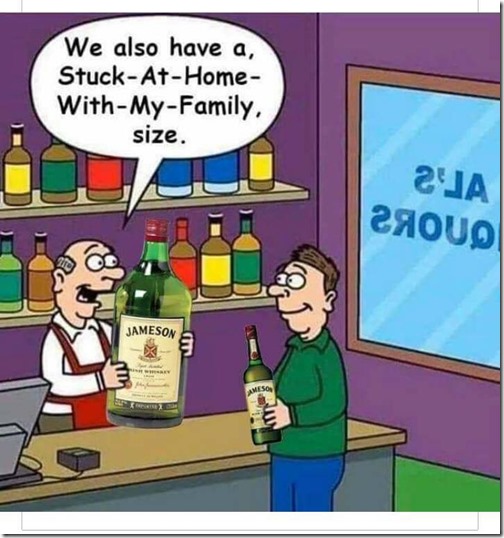 Hmm, that’s the size I’ve been buying for years.

The Shopping Cart Theory of Humanity

The shopping cart is the ultimate litmus test for whether a person is capable of self-governing.

To return a shopping cart to either the grocery store or a cart corral is an easy, convenient task and one which we all recognize as the correct, appropriate thing to do.  To return the shopping cart is objectively right.  There are no situations, other than dire emergencies, in which a person is not able to return their cart.

Therefore the shopping caret presents itself as the apex example of whether a person will do what is right without being force to do it.

A person who is unable to do this is no better than an animal, an absolute savage, unfit to interact with proper humans, who can only be made to what is right by threatening them with a law and the force and punishment that stands behind it.

The Shopping Cart is what determines whether a person is a good or bad member of society.

I fully and whole-heartedly agree and believe this.  And you can see this in action in any grocery store parking lot.  Aldi in my neck of the woods actually makes you put a quarter in the slot to get a cart and if you want your quarter back you have to bring the cart back because there are so many “bad” members of society out there.  It does my heart good to see so many people who leave their quarters in the slot so the next person doesn’t have to dig for one to get a cart, but I wonder how many people take the quarter when they bring the cart back, instead of paying it forward, not having paid a quarter to begin with?  How many other litmus tests are out there, if we look for them?  Holding the door for someone; Helping an elderly person when we can; We used to call these things be polite, but aren’t they really doing something that we should be doing, even though we really don’t have to do them?

The next time you go to the grocery store, look around the edges of the parking lot and see how many carts are not where they’re supposed to be.

I’m on my second Guardian Angel.  My first one quit and is now in therapy.

Since hockey has been cancelled, no one has seen the Zamboni Driver.

But I’m sure he will resurface eventually.

Am I the only one who thinks that America has become one giant Jerry Springer show? 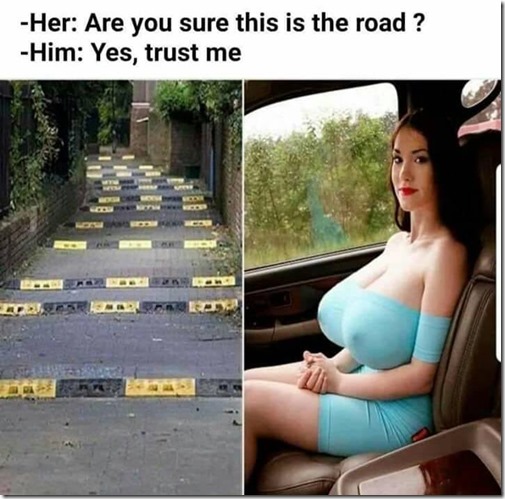 Yup, NOT going in there!

The lawyer is going home after a days worth of work and he noticed there’s a guy in the median on all fours eating grass.

He stops, backs up, rolls his window down and says ”what the hell are you doing?” And the guy says “I’ve exhausted my welfare and I’ve been reduced to eating grass!” The lawyer rolls his window up and thinks about it for a minutes, then opens his door and says, “get in…you’re coming home with me“.

The guy gets in and says “I sure appreciate that! I been eating grass there all day and nobody stopped to help me out!”

The lawyer says “you’re gonna LOVE my place!” He holds his hand up to his neck and says, “my grass is about this fucking high!”

Elvis Costello and Abba are touring together this summer, but they haven’t figured out who the headliner will be.
So, watch for Abba and Costello to find out who’s on first.

And if you don’t get THAT joke, you might have to ask your grandparents.

Thanks to Lynn for sending this one.  We have these little guys here in Indiana, not like they do in some other places, but we do have them.  And yes, please ignore them!  They are NOT user friendly.  Back when I was a cop on base, I was the desk sergeant one night and we left the back door open cause it was hot and we used to step out there to smoke.  Anyway, this baby Opossum wondered in and I didn’t realize it until I heard him behind me.  I figured no big deal, I’d just herd him back out the door.  Oh HELL no!  Long story short, 3 patrol units, 2 broken chairs, numerous scratched pieces of furniture, walls and carpeting later and this demon spawn from the ninth level of hell was finally evicted from the building.  And it was a BABY!  I’m so glad this was before cell phones were as prevalent as they are now.

So this next one is really, really cool.  Thanks to John S. for sharing.

Remember The Ventures, a rock band from the 50’s and 60’s and their original 17-year-old drummer who left after 8 months and went into the Air Force?

Now a four-star General, he came back to play with them again, in uniform.
This is pretty cool and will start the day with a smile.

Brought a tear to my eye. 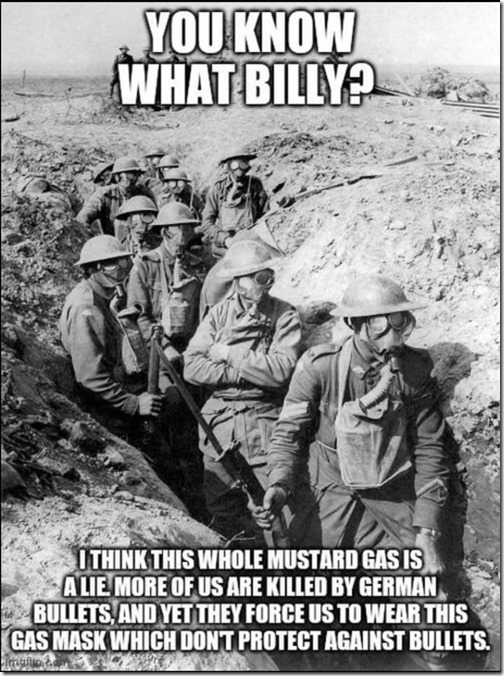 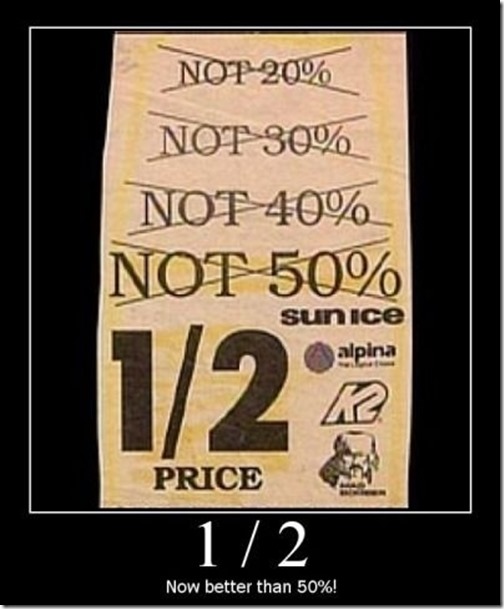 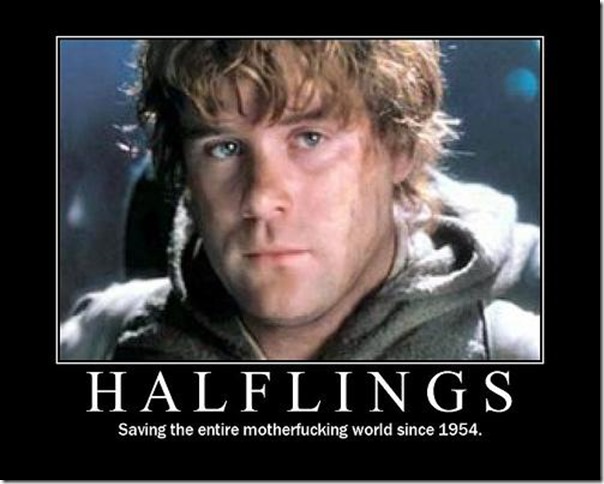 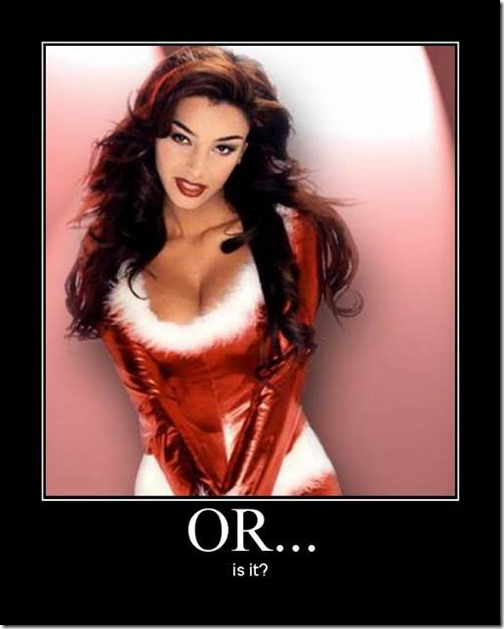 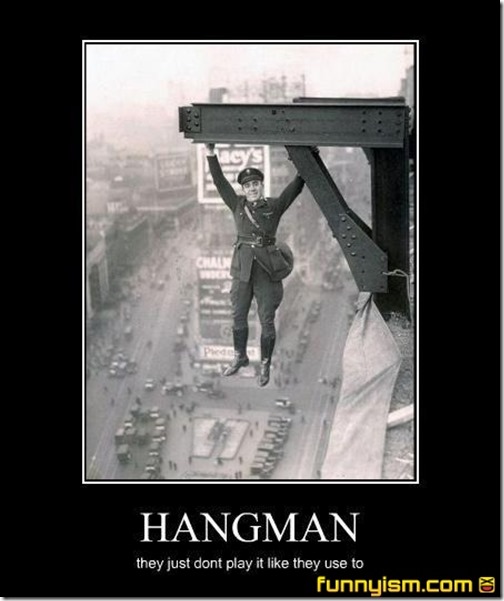 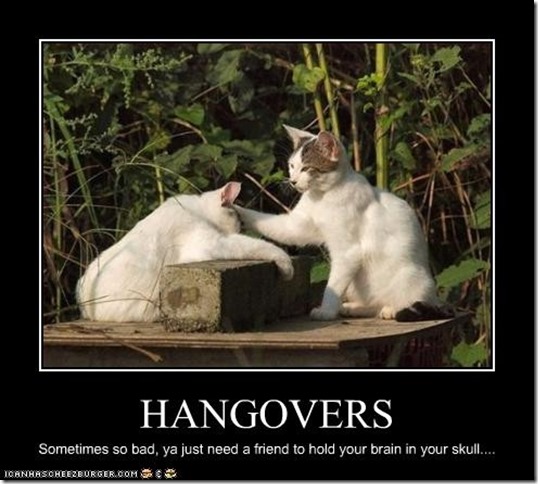 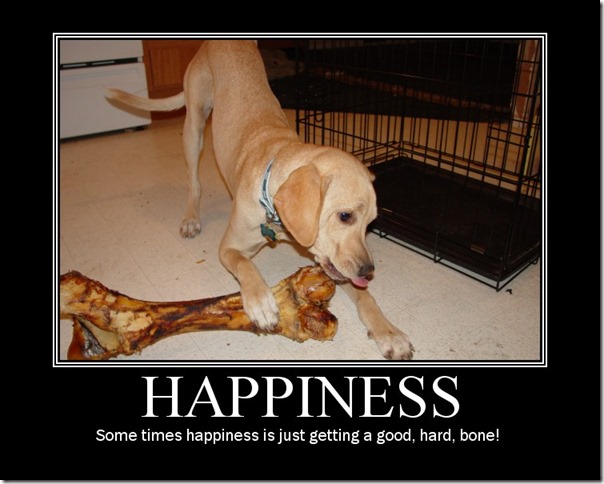 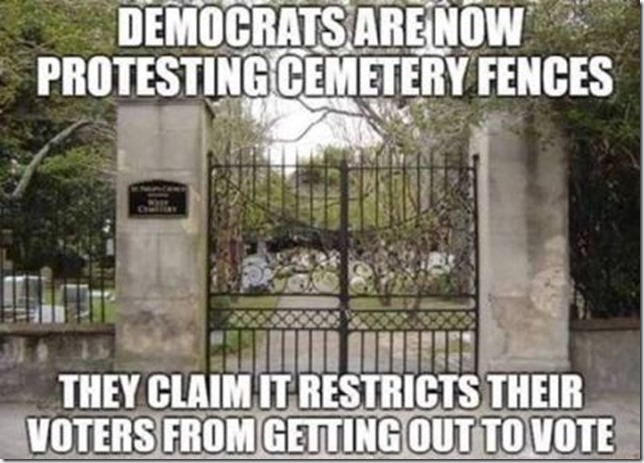 How many believe that this is ending in 2 weeks and your life is back to normal?

Now slap yourself with it.

Okay, I gotta go check on Guido, cause I just got a message from Donnie G…

I just came back to the fire pit. Guido will be along as soon as he fetches himself out of the stream.

That’s pretty impressive.  You guys have seen Guido.  He’s no slouch.  That means we gotta be nicer to Donnie?  Nah.  We just gotta make sure we have a bit more running room and aren’t that close to the stream.

And I got this one from Leah…

So, I got curious, and looked it up https://www.youtube.com/watch?v=9jQjDsDYKmE&feature=youtu.be

Sure enough, that spirit animal pig is true!

Thanks for doing the leg work … or um … internet work (?) there Leah.  It’s nice to know that the silly stuff, at least some of it, that is sent to us is based on fact.

But it’s NEVER okay to stop at a yellow light when we both could’ve made it through, bitch!

I’m so friggin’ bored, I think I’ll go knock on a Jehovah’s Witness door and talk to them about the power of sex, drugs, and rock and roll.

Masks are apparently the new bra …

They’re uncomfortable, you only wear them in public, and when you don’t wear one, everyone notices.

On a scale of 1 to 1984, how free do you feel wearing a muzzle while you’re walking around the grocery store following directions taped to the floor?

A man asked his wife, “What would you do if I won the lottery?”

She replied, “I’d take half and leave you.” 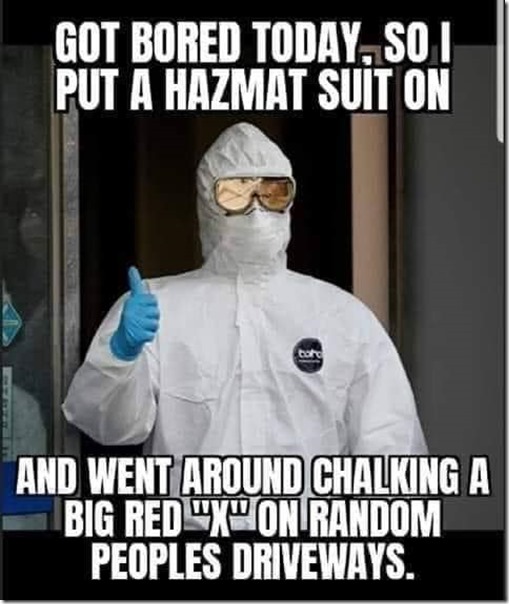 I wonder if that would work for me in MOPP gear.  That could be great fun!  Although, in my neighborhood, I’d probably get shot by the second house.

My wife sent me a text that said, “Your great”

So, naturally, I wrote back, “No, you’re great”

She’s been walking around all day happy and smiling.

Should I tell her I was just correcting her grammar or just leave it?

Okay, I got this next one….

And I thought…wait a minute…

So yeah, I’m a bit of a nerd and I just spent the last 2 hours building a spread sheet and doing the math and here’s the totals for the WHOLE country, cause like, it’s easy to pick and choose states to make the numbers do what you want them to do.  Cause New York and New Jersey are like the top two hot spots in the country right now.  As a matter of fact, all four of the top spots are on the democrat side, now I’m not saying that’s anything, just saying that’s going to skew the numbers.  When you take the country as a whole…

Republican Cases: 1,388,838
Democrat Cases: 1,367,581
Again, relatively close with the Republican’s ahead by about the same margin as the population, which makes perfect sense!

And all the percentages bear out as well.

The state with the least number of deaths is Wyoming with only 7 (Republican Governor) But the states with the lowest percentage of death per capita there are 4 of them that are tied at 1/10 of 1% of the population of the state dying:
Montana (Democrat)
Alaska (Republican)
Wyoming (Republican)
Hawaii (Democrat)

Now, the 4 states with the lowest number of people dying compared to the number of people who have the virus are:
Nebraska
Utah
South Dakota
Wyoming
All Republican – but I don’t think that really means anything, although the top 8 spots in that category are taken up by Republican Governors…so maybe it does.

So yes, I’m a nerd.  But, I’m a radical nerd.  And one someone tries to fuck with numbers to prove a point it pisses me off.  Numbers don’t lie.  Liars lie.  So, don’t be a lying liar who lies.

Okay, a couple more and we’ll call it a day. 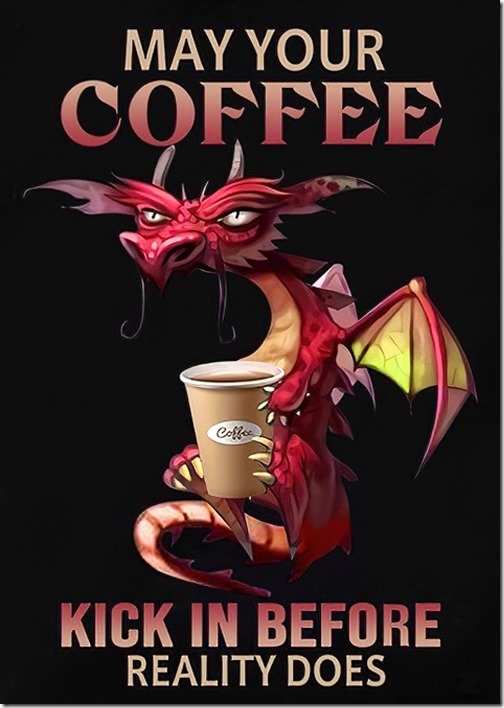 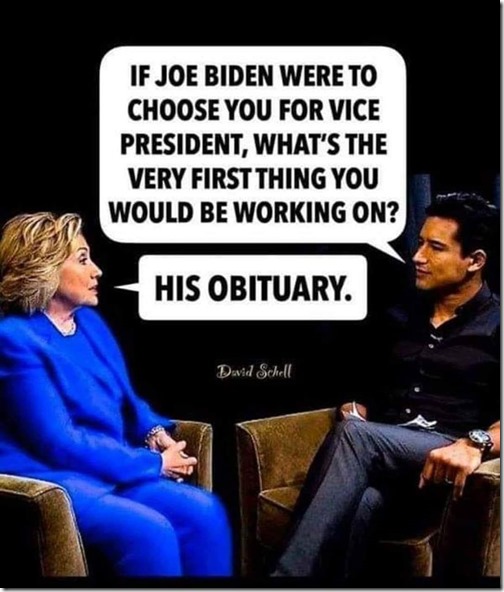 And with that’s we’re going to call it a day.

Be well, be safe, be happy, be lively, but most of all, be back tomorrow for another issue of your favorite ezine.