So, did you miss me?

Yeah, it was a crazy day for me yesterday, but I’m back now.  At least for a little while.  So, lots of excitement up in Michigan where people marched on the state building and demanded their freedom.  I didn’t know you were allowed to carry firearms inside the capital building in Michigan so long as you carried them openly and you had no ill intent.  I think that’s what I read.  How can they tell what your intent is by the way you carry them?  I guess if you start shooting people, you have ill intent and if you don’t you have good intent.  Works for me.  The Supreme Court up there overturned the Governor’s crazy orders for forcing the people to stay at home.   There’s smart ways of doing things and then there’s draconian ways of doing things.

How many of you got a chance to watch that video I posted the other day?  Those doctors made an awful lot of sense, didn’t they?  Why are we quarantining healthy people?  Now, I’m in that danger zone, I’m over 60 at a whooping 61, but I’m healthy as a horse.  A fat, diabetic, horse with a little bit of high blood pressure that is nicely controlled with medication, I smoke too many cigars, and have too much arthritic pain, but still a friggin’ horse, OKAY!!!  (Sorry, got a little carried away there.)  Anyway, what I’m saying is, I’m not overly concerned with myself, but Mrs. Dragon and Izzy Dragon both have compromised immune systems, so the longer I can telework and keep the nasty shit away from them, the better I feel about all of this.

But even at that, I have taken them both out shopping and stuff.  We wear face coverings to protect ourselves.  And after three months of data, we find out that this thing really isn’t any more dangerous than the flu, and I looked up the numbers, we really do loose more people than this to flu every couple of years.  And if they really are over inflating the numbers, i.e. everyone who dies, dies of COVID because the hospitals and states get more money that way and because it perpetuates the madness that way, then are we terribly over reacting at this point?  Or have we reacted appropriately UP TO this point and now that we KNOW the facts, is it time to unwind and put things in perspective?

But, I do know that there is still one party who is trying to use this, and anything else they can use to gain control and it makes me sick to my stomach every time I see it.  They are even using they’re own democratic candidate.  Does anybody actually believe that Biden will be anything other than a puppet for Pelosi and her gang of thieves and monsters?  If he even lives long enough to make it through the first year of his presidency…if he were to be elected?

Okay, I’m sorry.  I’m not usually so political.  Especially so early in the morning.  I don’t think Trump is such a great prize either…just so you know.  But, I do know that he is a hell of a lot better than the other side.

But, seriously, these guys are the best this country has to offer?  This is the best?  This is the United States saying to the rest of the world, HERE! *Drum roll and Flourish* (whatever the hell a Flourish is) HERE IS THE BEST OF THE UNITED STATES WE OFFER UP TO REPRESENT US!!!!!

If I was an artist and this was a canvas, I’d scrape off the whole thing and start over again.

But we have to deal with what we have…. and I said I would stop.  It must be the caffeine low level light…it was flashing amber in the corner of my eye when I started, now it’s flashing red and there’s a sweet little female voice I can hear in my ear saying, “warning, caffeine levels are at dangerously low level.  warning, caffeine levels are at a dangerously low level.” over and over again.  If I could find out where the circuit breaker is on that warning button I’d pull it to shut her up because she’s getting annoying and about twenty minutes ago when she started up, the dogs went and hid in the bedroom.  So, before I jump into more stuff that pisses me off…dammit, she’s added a klaxon…I’m going to go get more coffee.  Yes, I said MORE coffee, because I’ve already had some coffee, but it obviously hasn’t been ENOUGH coffee or I wouldn’t be getting all the damn warnings (WILL SOMEBODY PLEASE SHUT THAT STUFF OFF!!!!!) and you guys start in on the funny stuff. 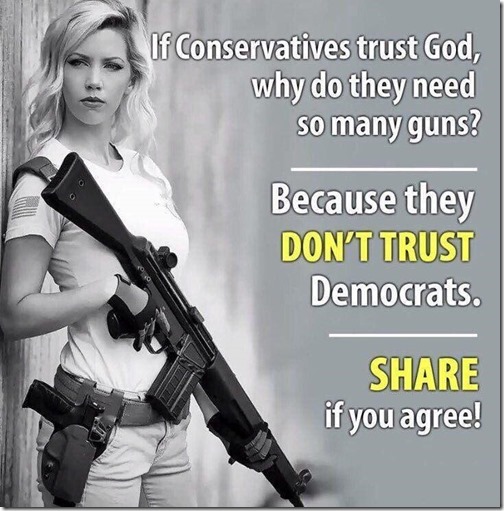 Okay, so maybe that wasn’t the funnies thing to start with…let’s try this again.  Something funny this time.

Well, I don’t know if it’s funny or not, but I GOTS TA GET ME ONE of those cups!!!!  I like that one!  LOL!  And that, my fellow campers, is called TRUTH IN ADVERTISING!

Okay, one more try to get something funny out there… 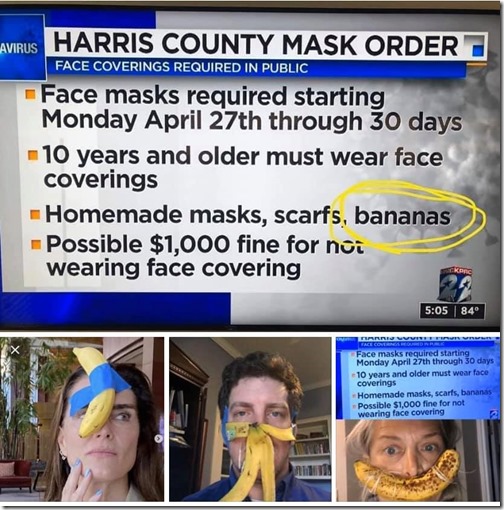 (who you calling a Ho, bitch!)

It’s going to be one of those days…the voices in my head are talking back!

No one should be allowed to drive again until there are no fatal accidents for 14 consecutive days.  Then we can slowly begin to phase in certain classes of people who can begin driving again, but at only half the posted speed limit.

Oh, I see what you did there…that’s called sarcasm.  And it’s not bad.

Awww, she’s smiling in her sleep again.  I wonder how she killed me this time.

A guy gets pulled over for speeding and the officer says, “What’s your name, son?”  He replied, D-d-d-dav-dav-david, sir.”  The Officer looked at him suspiciously and said, “Oh, do you have a stutter?” The guy replied, “No sir, my dad has a stutter and the guy who filled out my birth certificate is an asshole.” 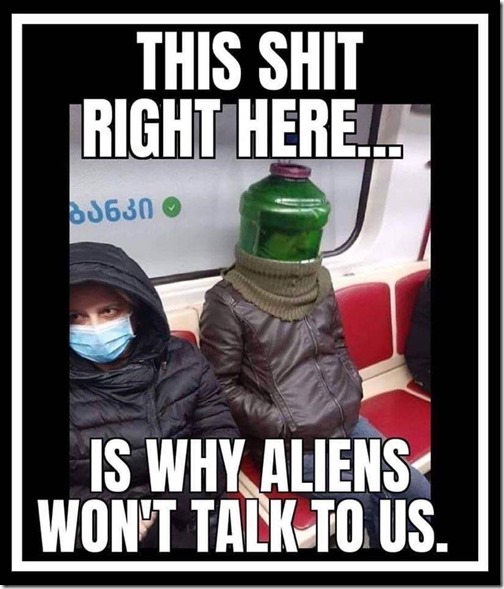 I wonder how many animals we had to ride before we discovered that horses were cool with it. 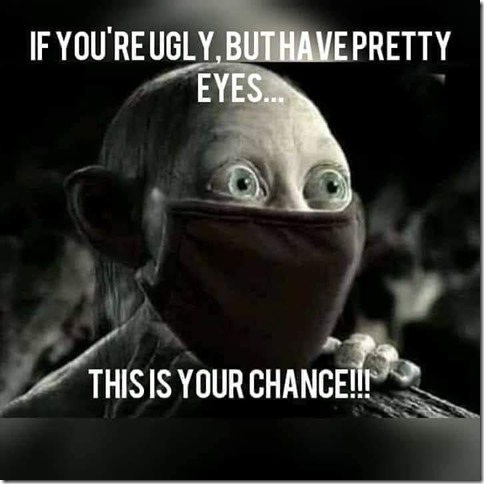 If you ever fall over in public, pick yourself up and say, “sorry, it’s been a while since I inhabited a body.” and just walk away. 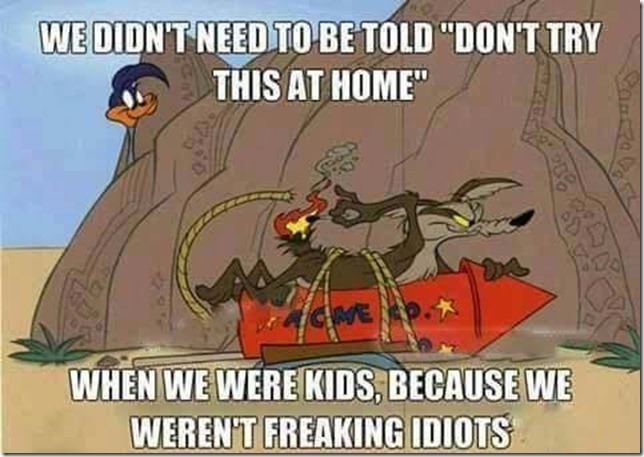 Okay, that may be true…but I’m pretty sure, when I was a kid … I tried that one at home…just sayin’

Hugh Hefner became a multi-millionaire staying at home in his jammies…I’m not having the same results. 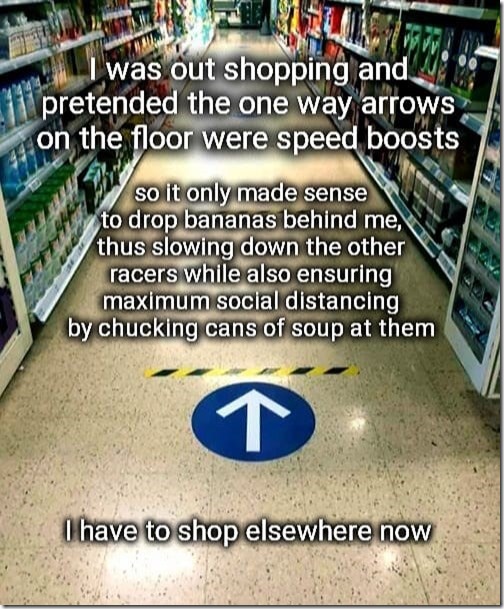 Why is it called “Boob Sweat” and not “Humidititties”? 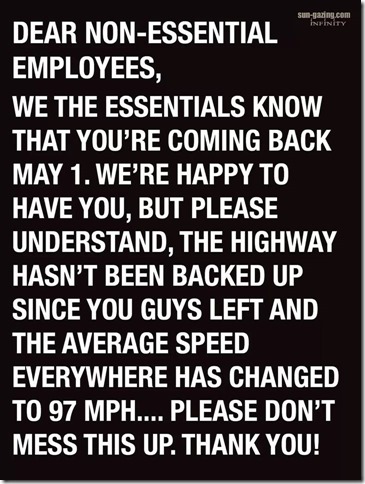 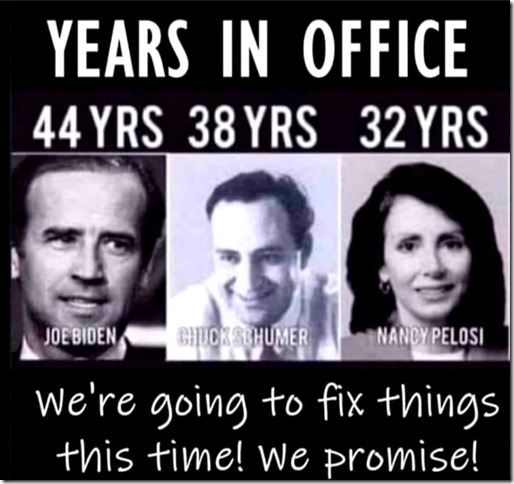 Oh, well they promise.  Haven’t they had long enough!

Some kids are starting to notice they haven’t seen their “UNCLE” since their DAD has been home.

If you wear your jeans 5 days in a row, they become all baggy and it looks like you’re losing weight.  Follow me for more quarantine life pro tips.

My goal in life is to piss off at least on person a day.

So far I’m about 4 years ahead of schedule. 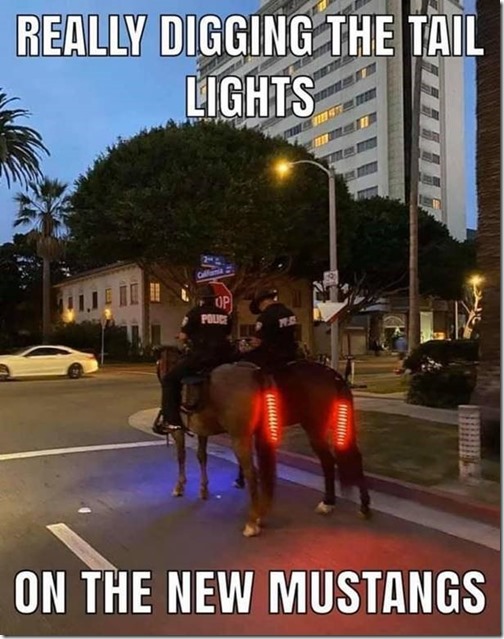 Wife: Did I get fat during quarantine?

Husband:  You were never really skinny!

Cause of Death:  Corona Virus

You know…I was sitting here thinking, no that’s not true…then I remembered and went … oh yeah.

This next one is an oldie, but goodie.  I’ve seen it a couple of different ways, but here’s the Cajun version…

An old Cajun man, Boudreaux, who had been a retired crawfish farmer for a long time,  became very bored and decided to open a medical clinic in Mamou. He put a sign up outside that said:

Doctor Young, who was positive that this old Cajun geezer didn’t know beans about medicine, thought this would be a great opportunity to get $1,000. So he went to Boudreaux’s clinic.

This is what transpired.

Dr. Young: — Mr. Boudreaux, I have lost all taste in my mouth. Can you please help me ??

Boudreaux: “Congratulations! Mais you don got you taste back you. Dat will be $500.”

Dr. Young gets annoyed and goes back after a couple of days figuring to recover his money.

Dr. Young: “I have lost my memory, I cannot remember anything.”

Boudreaux: “Congratulations! You don got you memory back you. Dat will be $500.”

Dr. Young (after having lost $1000) leaves angrily and comes back after several more days.

Boudreaux: “Well, Mais I don have any medicine for dat so —  “Here’s your tousand dollars back.”

Boudreaux: “Congratulations! Mais you don got you sight back you! Dat will be $500.”

Moral of story  —  Just because you’re a “Young doctor” doesn’t mean that you can outsmart an old Cajun man!!!

I’m buying this T-Shirt for Mrs. Dragon.  She loves all those murdery shows

Day 45:  The garbage man stuck a pamphlet for AA on my recycling bin.  Judgmental prick, mind your own business.

I’ve never been so thankful to be low maintenance.  No nails, no lashes, no crazy hair upkeep, no tanning, no Botox.  I’ll just be the same hot mess coming out of all this as I was going in.

Have we tried giving 2020 a snickers?

Are we thinking it’s just hungry? 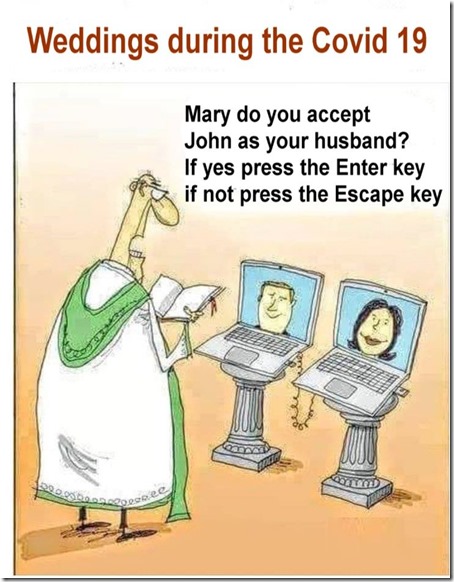 Let’s not tell some people when the quarantine is over. 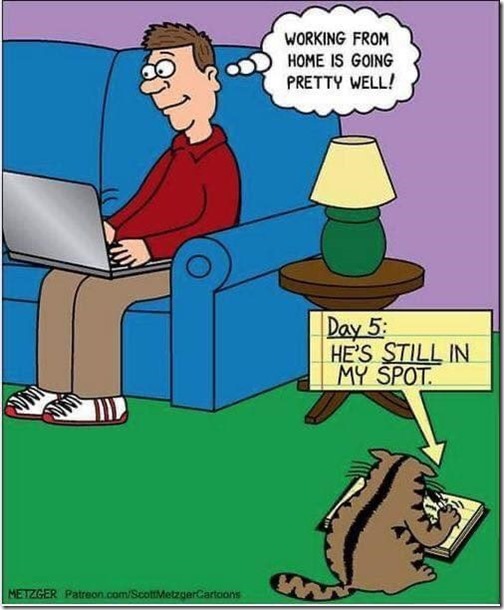 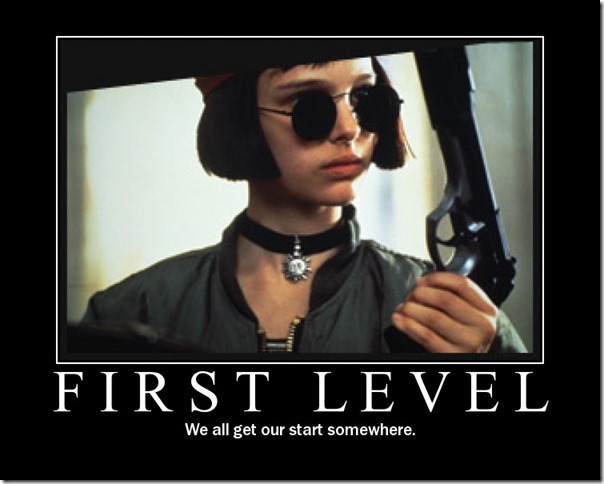 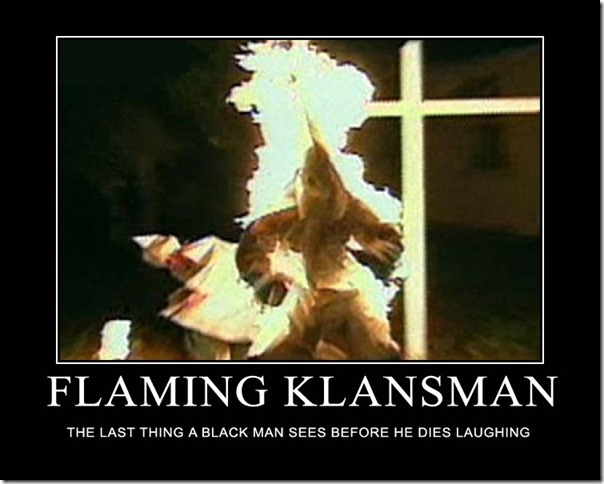 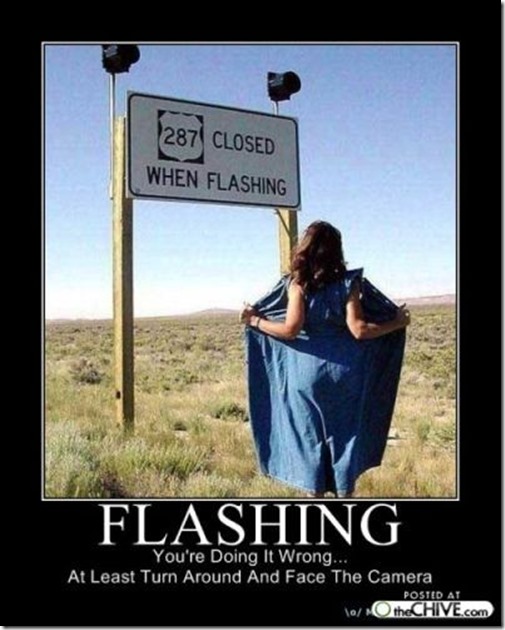 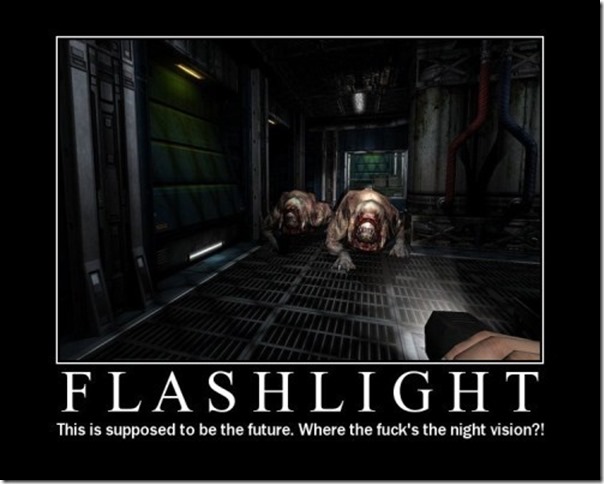 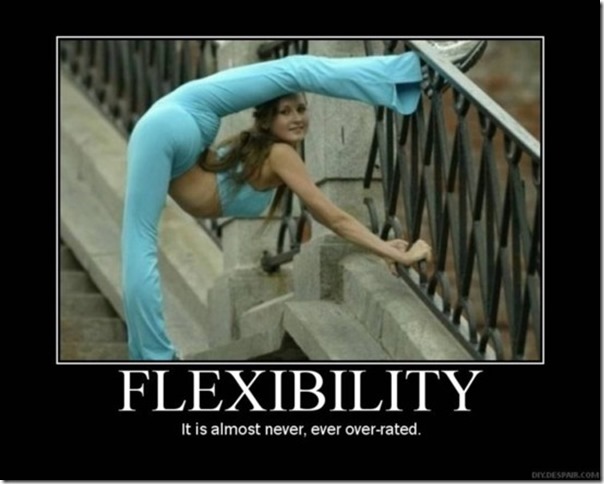 I can’t believe someone broke into my shed and stole my limbo stick.

How low can you go.

Parents: Why don’t my kids listen to me? 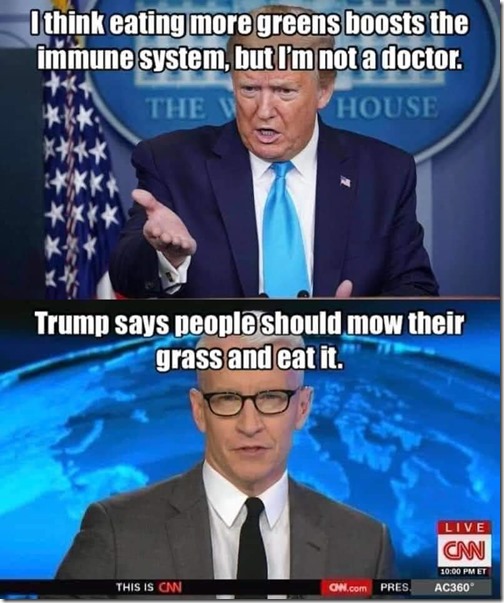 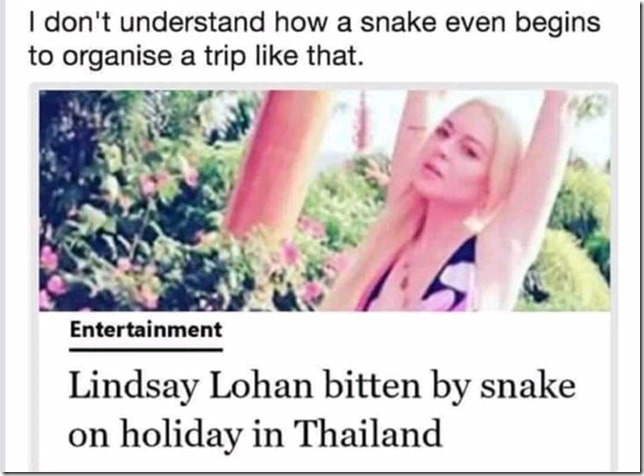 Okay, here’s one for the kids to ponder…

I thought I heard “Tubular Bells” wafting over the farm last night.  It was just my cold field.

And nope.  I’m not helping with this one

I was home for Christmas and my parents cooked a beef tenderloin.  I said, “Man, Budapest is going to love this.”  They asked who Budapest was.  I said, “I named my stomach Budapest because it’s the capital of HUNGRY” and that’s when they stopped calling me son.

The Lysol commercial told me to disinfect the things I touch the most.

I have a feeling this is going to burn. 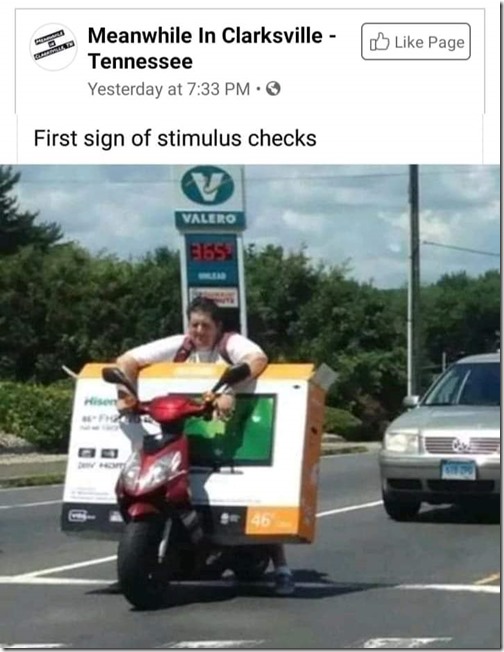 Someone threw a bottle of omega 3 pills at me!!

Luckily my injuries were only super fish oil…

So many people these days are too judgmental.

I can tell just by looking at them.

My sexual desires have been getting out of control…

But it wasn’t until I spanked a statue that I knew I’d hit rock bottom.

Hey, can’t blame me for that last one, it’s from Aussie Pete. 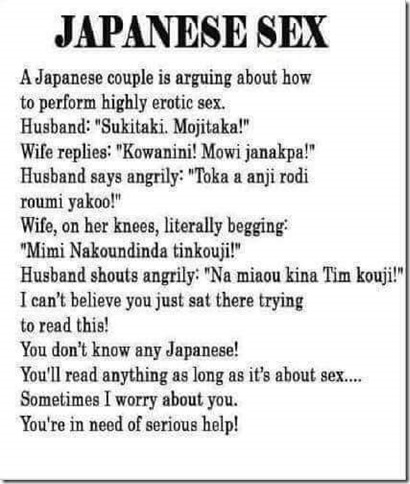 Feels good to have your shit together.

Personally I wouldn’t know, but I bet it feels good.

Okay, wait…. I have a question.  How did the movie Ground Hog Day finally shift to the next day for Bill Murray?  Have we tried that yet?

Courage is knowing it might hurt, and doing it anyway.

Stupidity is the same.

And that’s why life is hard. 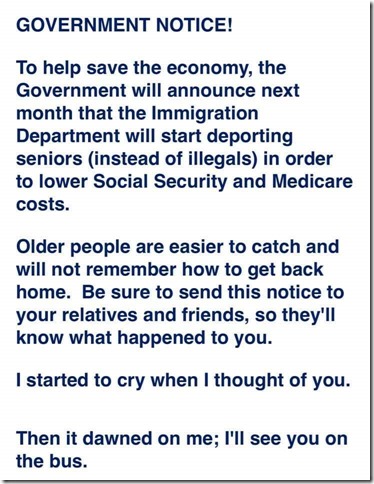 Everyone keeps saying there is going to be a baby boom when this is all over…There may be a lot of Divorces and Justifiable Homicides, too.

I’ve eaten 14 meals and taken 6 naps and it’s still today.  Are you kidding me!?

Okay, I want blame to be squarely placed where it needs to be for this next one!!!  This one is NOT mine!  It is truly and totally horrible!!!  In the interest of protecting her, I promised Stephanie I wouldn’t tell anyone who sent this in because I was afraid someone would have to hunt her down and smack her!!

Home schooling went well yesterday:  For science class we studied the effects of Nyquil on students…

And that, dear campers, is it for today.  I hope you enjoyed the extra-large issue.  I tried to make up for missing yesterday.  Until we meet up again.  Stay safe, stay warm.  Be helpful and happy.

Love to you all.