Well, another week is in the record book.  They sure do seem to be piling up quickly. It has been a long, tedious week.  I don’t have anything to talk about this morning, but I’m sure by the time it’s all done, I’m sure you’ll be sick and tired of me.

So, let’s get started.

Let’s everyone give a round of applause to Ginny for finding out the true explanation of life…and here it is:

Life On The Front Porch
On the first day, God created the dog and said, “Sit all day by the door of your house and bark at anyone who comes in or walks past. For this I will give you a life span of twenty years.”

The dog said, “That’s a long time to be barking.  How about only ten years and I’ll give you back the other ten?”

And God said that it was good.

On the second day, God created the monkey and said, “Entertain people, do tricks, and make them laugh.. For this, I’ll give you a twenty-year life span.”

The monkey said, “Monkey tricks for twenty years? That’s a pretty long time to perform. How about I give you back ten like the dog did?”

And God again said that it was good.

On the third day, God created the cow and said, “You must go into the field with the farmer all day long and suffer under the sun, have calves and give milk to support the farmer’s family. For this, I will give you a life span of sixty years.”

The cow said, “That’s kind of a tough life you want me to live for sixty years. How about twenty and I’ll give back the other forty?”

And God agreed it was good.

On the fourth day, God created humans and said, “Eat, sleep, play, marry and enjoy your life. For this, I’ll give you twenty years.”

But the human said, “Only twenty years? Could you possibly give me my twenty, the forty the cow gave back, the ten the monkey gave back, and the ten the dog gave back; that makes eighty, okay?

Life has now been explained to you.

There is no need to thank me for this valuable information. I’m doing it as a public service. If you are looking for me, I will be on the front porch.

Okay, wait a damn minute!!!!!! It says right there, “forty years, we slave in the sun to support our family.” Forty years!  FORTY YEARS!!!  Somebody owes me some friggin’ years back!!!!

What an absolutely touching story.  I just had to share it with you.  It’s called, “The Umbrella”

On a rainy afternoon, a group of protesters were gathered outside the grocery store handing out pamphlets on the “evils” of America. I politely declined to take one.
There was an elderly woman behind me and a young (20-ish) female protester offered her a pamphlet, which she politely declined.
The young protester gently put her hand on the old woman’s shoulder and in a patronizing voice said, “Don’t you care about the children of Iraq?”
The old woman looked up at her and said: “Honey, my father died in France during World War II, I lost my husband in Korea , and a son in Vietnam.

All three died so a naive, ignorant, self-centered bimbo like you could have the right to stand here and badmouth our country, and if you touch me again, I’ll shove this umbrella up your ass and open it.”

So, I just read where “America’s Dad” Bill Cosby was found guilty of 3 counts of sexual assault and can face 30 years in prison.  He’s 80 year’s old.  Put this dude in prison and five years will probably be a life sentence.  I think it’s too easy.  I think he ought to be treated the same way he treated those women.  Oh wait.  He’s going to prison.  He WILL be treated the same way as those women…..without the benefit of the drugs. 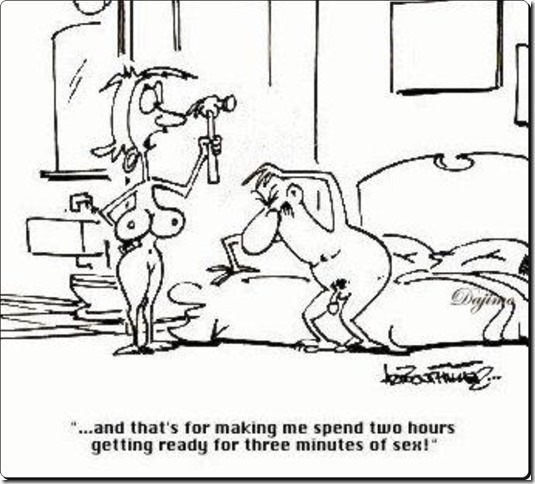 I have to stop saying, “How stupid can you be?”  I think people are starting to take it as a challenge.

If you mated a Bulldog and a Shitzu would it be called a Bullshit?

It’s just a matter of time before they add the word “Syndrome” after my last name.

It just dawned on me why Mayberry was so peaceful and quiet…nobody was married.  Here are the single people that come to mind: Andy, Aunt Bea, Barney, Floyd, Howard, Goober, Gomer, Sam, Ernest T. Bass, the Darlin family, Helen, Thelma Lou, Clara…in fact, the only one married was Otis and he stayed drunk.

God was sitting in heaven one day when a scientist said to Him, “God, we don’t need you anymore. Science has finally figured out a way to create life out of nothing – in other words, we can now do what you did in the beginning.”

“Well,” says the scientist, “we can take dirt and form it into the likeness of you and breathe life into it, thus creating man.”

So the scientist bends down to the earth and starts to mold the soil into the shape of a man. 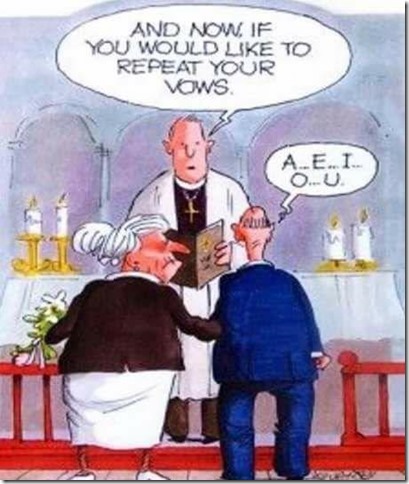 So this next one comes with a disclaimer… You’ll figure it out.

My old Grandpa said to me, “Son, there comes a time in every man’s life when he stops

bustin’ knuckles and starts bustin’ caps and usually it’s when he becomes too old to take a whoopin’.”

I don’t carry a gun because I’m angry; I carry a gun so that I don’t have to spend the rest of my life hating myself for failing to be prepared.

I don’t carry a gun to make me feel like a man; I carry a gun because men know how to take care of themselves and the ones they love.

Police protection is an oxymoron: Free citizens must protect themselves because police do not protect you from crime; they just investigate the crime after it happens and then call someone in to clean up the mess. 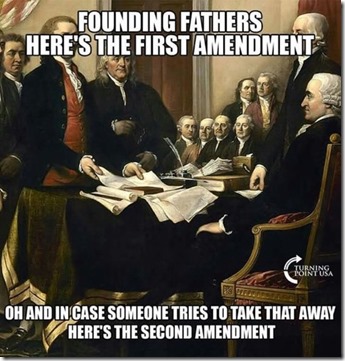 Now, anyone who’s read this e-zine for any length of time at all KNOWS how I feel about the police, my brothers in blue.  I don’t say the last paragraph lightly or derogatorily, but it still is true.  The police do not have the manpower to be everywhere every time.  They can only do what they can do.  It is up to the rest of us to do what we have to do to protect ourselves from the evil in the world.  Like this next little history lesson…and don’t think for a moment, that it can’t happen here!!

From 1929 to 1953, about 20 million dissidents, unable to defend themselves, were rounded up and exterminated

From 1915 to 1917, 1.5 million Armenians, unable to defend themselves, were rounded up and exterminated.

From 1939 to 1945, a total of 13 million Jews and others who were unable to defend themselves were rounded up and exterminated.

From 1948 to 1952, 20 million political dissidents, unable to defend themselves, were rounded up and exterminated.

From 1975 to 1977, one million educated people, unable to defend themselves, were rounded up and exterminated.

56 million defenseless people were rounded up and exterminated in the 20th Century because of gun control.

You won’t see this data on the US evening news, or hear politicians disseminating this information.

Guns in the hands of honest citizens save lives and property and, yes, gun-control laws adversely affect only the law-abiding citizens.

With guns, we are ‘citizens’; without them, we are ‘subjects’.

During WW II, the Japanese decided not to invade America because they knew most Americans were ARMED! Gun owners in the USA are the largest armed force in the World!  If you value your freedom, please spread this anti-gun control message to all of your  friends.

The purpose of fighting is to win. There is no possible victory in defense.

SWITZERLAND ISSUES A GUN TO EVERY HOUSEHOLD! SWITZERLAND’S GOVERNMENT ISSUES AND TRAINS EVERY ADULT IN THE USE OF A RIFLE.  SWITZERLAND HAS THE LOWEST GUN RELATED CRIME RATE OF ANY CIVILIZED COUNTRY IN THE WORLD!!!

IT’S A NO BRAINER!  DON’T LET OUR GOVERNMENT WASTE MILLIONS OF OUR TAX DOLLARS IN AN  EFFORT TO MAKE ALL LAW-ABIDING CITIZENS AN EASY TARGET. 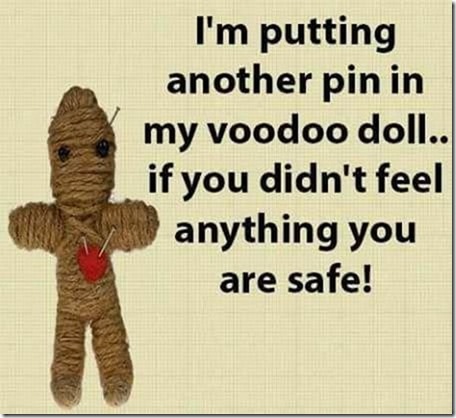 Paul was ambling through a crowded street fair when he decided to stop and sit at a palm reader’s table.

The mysterious woman said: “For fifteen dollars, I can read your love line and tell your romantic future.”

Paul readily agreed and the reader took one look at his open palm and said: “I can see that you have no girlfriend.”

“Oh my goodness, you are extremely lonely, aren’t you?”

“Yes,” Paul shamefully admitted. “That’s amazing. Can you tell all of this from my love line?”

“Love line? No, from the calluses and blisters

After being with her all evening, the man couldn’t take another minute with his blind date.

Earlier, he had secretly arranged to have a friend call him on the phone so he would have an excuse to leave if something like this happened.

When he returned to the table, he lowered his eyes, put on a grim expression and said: “I have some bad news. My grandfather just died.”

“Thank heavens,” his date replied. “If yours hadn’t, mine would have had to!” 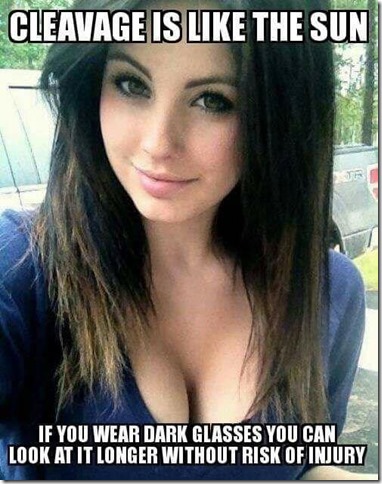 In a recent survey carried out for the leading toiletries firm ‘Brut’, people from Chicago have proved to be the most likely to have had sex in the shower.

In the survey, 86% of Chicago’s inner city residents (almost all of whom are registered Democrats) say that they have enjoyed sex in the shower.

The other 14% said they hadn’t been to prison yet. 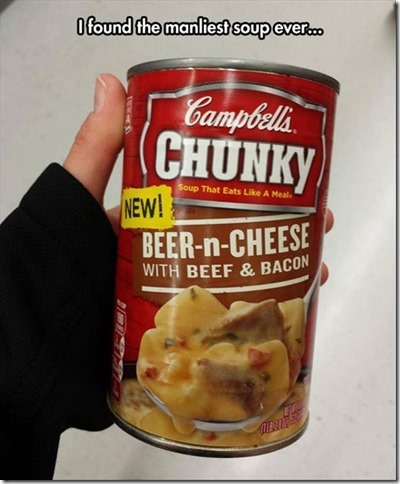 I would love to sit here and continue to write, quip, share pictures, jokes and fun…but alas, the days are not long enough and they stack up way too quickly.

So, my friends, until next week.