Dragon Laffs #1702–and another week comes to an end

It’s Friday and it’s too early in the morning to be sitting here behind a computer.  I fell asleep on the couch early last night night and somehow ended up in bed, (I’m still not 100% sure how that happened) so of course, my internal alarm clock said, “You’ve slept enough, it’s time to get up” so now I’m sitting here at a ridiculously early hour of the morning listening to a train horn off in the distance, and my 120 year-old house make noises that make me wonder if a critter is trying to dig through the kitchen floor or a scumbag is trying to get in the backdoor.  Either way, there’s going to be an angry Mrs. and Izzy Dragon when they’re woken by gunfire at this ridiculously early hour of the morning.  Maybe if I switch out for a smaller caliber it won’t startle them as much and they won’t be as upset… hang on, I’ll be right back…

Damn….I can’t find anything of a smaller caliber….I knew I should’ve spent a little extra and gotten that silencer.  Well, maybe it’s just the house settling and this will all just be an exercise in OPSEC.  We’ll see… although now both dogs are looking towards the back of the house and looking towards me … back and forth like, “Are you going to go check that noise out or are we going to have to?”  Well, it is your damn job.  But, don’t bark and wake up the rest of the house or I’ll have to put my size ten house slipper up your ass…go on!  Go earn your kibble.

While they do that, let’s laugh a bit shall we? 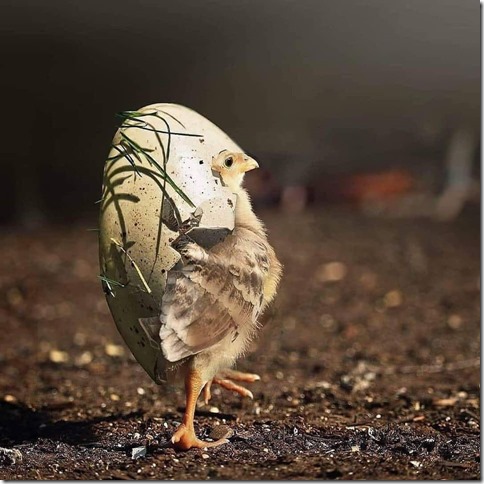 He looks like he’s armored up and standing guard, when in actuality, I think he’s just stuck.

And speaking of guards, dogs are back and they gave me the following report:
-The kitchen is secure
-The upstairs is secure (although the youngest dragon is now emotional because in order to check on her status, it required tasting her face which elicited an emotional response.  There was no tail wagging, so it is assumed it was an angry response.  Good luck with that one, sir)
-We were unable to gain entry to Mrs. Dragon’s quarters, so status is unknown Yeah, you lucked out on that one or one of you is liable to be at least wounded.  From now on, all perimeter checks are to forego Mrs. Dragon’s quarters
-Living room, and rest of the internal structure is secure, so we moved to the outside

-It snowed last night how the hell did you get outside…and why am I wasting my time letting you out to pee
-We chased 3 left wing, socialist rabbits from southwestern border of the property
-We encouraged the neighbor’s democratic feline to stay on his side of the fence
-The male child on the other side is stoned again.  Report complete, sir.

So, everything looks good, they didn’t wake up Mrs. Dragon, although it sounds as though Izzy is pissed, I don’t have to fire off any ammo, there’s plenty of coffee, plenty of laughs and the day is still, oh so very young.

I do miss my good buddy Lethal Leprechaun.  Rest in Peace, brother.

I got an email from Stephanie early this morning that made me laugh…Stephanie and I have been friends for a LONG time.  She’s been a part of Dragon Laffs almost from the beginning, so when I saw the subject of the email was: I do love you, I thought it was worded a little oddly and here’s why.

I tried to give you a star on laughs. Word press wanted me to form my own site in order to star. I begged out. Now, they won’t even let me comment on the laffs site at all. Not sure what I did wrong, but I have a special talent with electronic devices.

Hope you have a restful Easter.

And I’m (almost) sure she won’t mind me sharing this with you, it gave a great smile this morning.  A lot of my material comes you, my dear, lovely Stephanie.  And only you would have trouble giving stars to the site.  Love you right back baby.  I don’t know about a restful Easter, but it will be fun!  Thanks for the smiles and all the emails!

Here’s a little known fact… Did you know on the Canary Islands there is not one canary?
And on the Virgin Isles?
Same thing – not one canary there, either!

We can complain because rose bushes have thorns or rejoice because thorn bushes have roses. ~ Abraham Lincoln 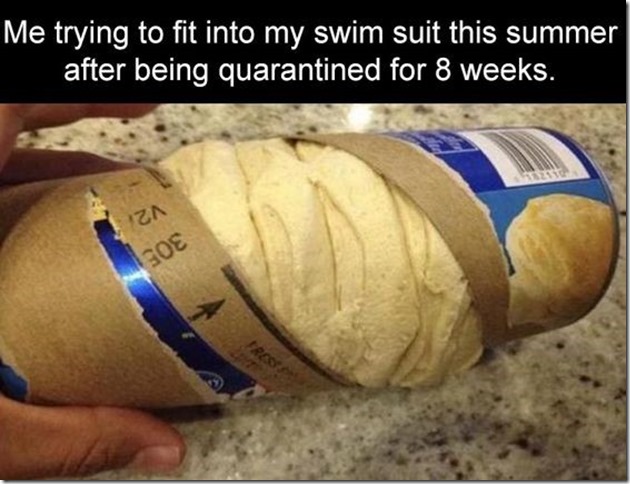 This next one is an awesome cartoon… 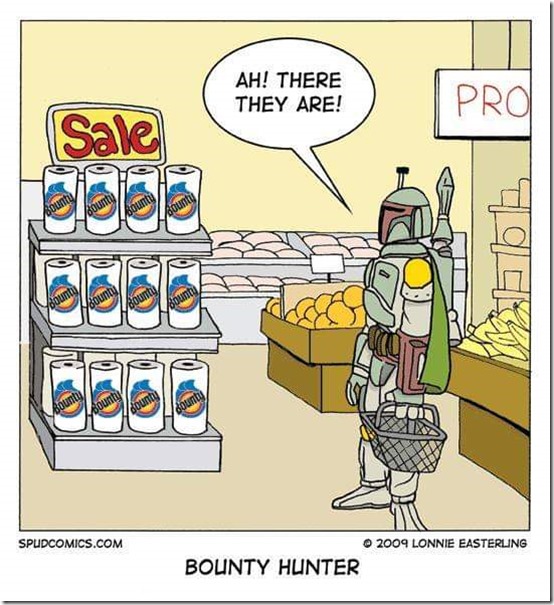 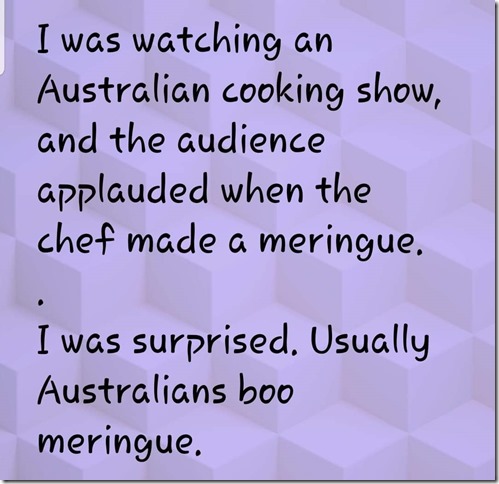 We’ll have to check with Peter on that one.

I don’t know…it sure looks like it’s floating to me.  But, I’ve definitely been inside too long.

Home School Day 1:
Wondering how I can get this kid transferred out of my class 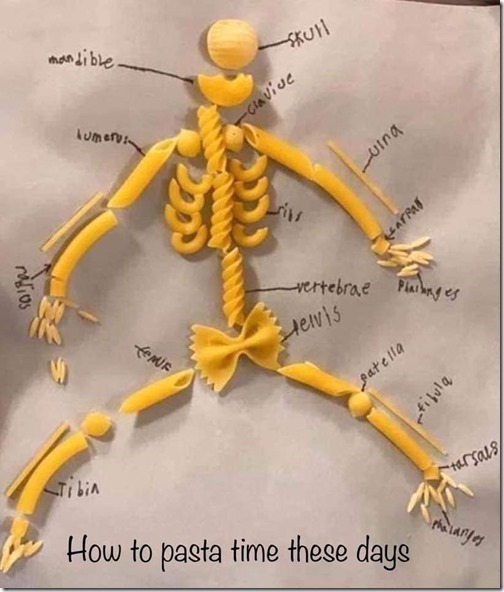 I swear my fridge just said, “What the hell do you want, now?”

“Alexia, what’s the weather supposed to be like tomorrow?”

“Don’t worry about it!  You ain’t going anywhere.” 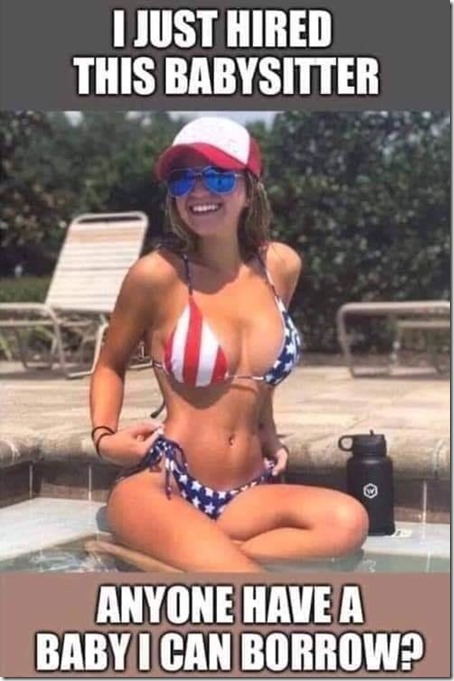 You think it’s bad now?  In 20 years, our country will be run by people who were home schooled by day drinkers… 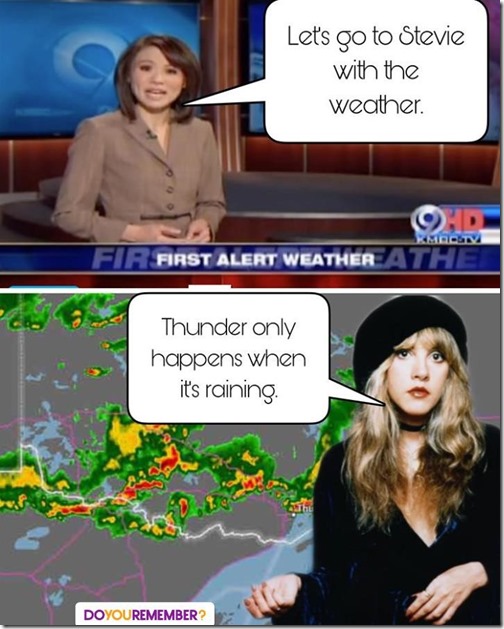 Yup, they ain’t gonna get that one, either.

While everything is shut down, maybe they should pave the roads.

That’s actually not a bad idea… 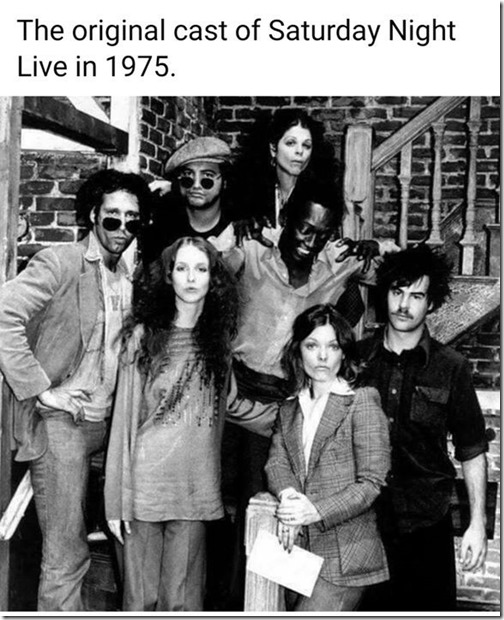 And how many of you can name them?  Half of them?  God, they all look so young.  Man, I miss that show. 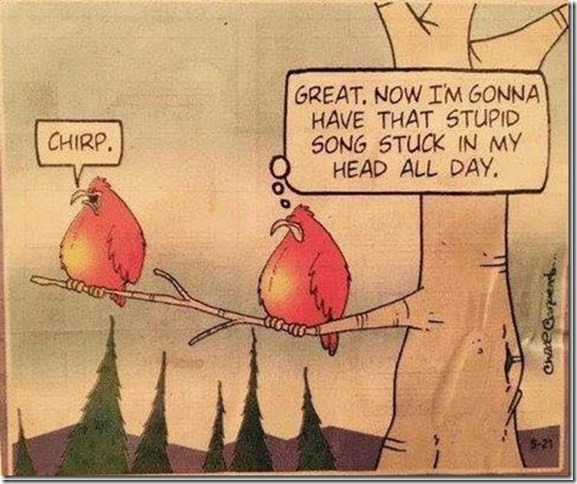 Here’s a cool little trip back from John S…

The iconic street crossing outside Abbey Road Studios in London gets a fresh coat of paint, as the always busy tourist hotspot is a little emptier these days.

In 2010, the site was declared a national landmark. More than 300,000 fans visiting the crossing every year.    According to the Guardian:

The cover for Abbey Road was shot at 11.35am on 8 August 1969, as John Lennon, George Harrison and Ringo Starr took a break from completing I Want You (She’s So Heavy) and The End, and Paul McCartney paused work on Oh! Darling. Standing on a step ladder in the middle of the road, photographer Iain Macmillan only had time to shoot six photographs on his Hasselblad camera given the oncoming traffic. McCartney selected the fourth image as the cover shot.

And if I hear any of you youngster say, “Who’s the Beatles?”  or “You mean Paul McCartney was in a band before Wings?” I swear to all the gods I’m going to fly over your house, raze your village to the ground, and devour all your town’s virgins!

I just read that New York alone now has more confirmed coronavirus cases than any other country in the world outside of the United States.  That’s pretty darn scary, right?  And it’s because our brothers and sisters in New York are right on top of each other, with so many people living so close together.  Social distancing… hell … physical distancing.  Keep away.  Stay home, stay inside, stay safe.

Prediction: There will be a minor baby boom in 9 months, and then in 2033, we shall witness the rise of THE QUARANTEENS.

Okay, I came up with a new dating app idea.  You match with people who are on the same meds as you. 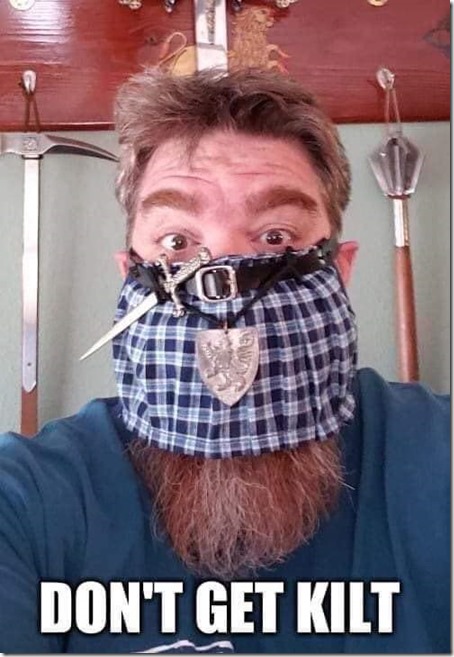 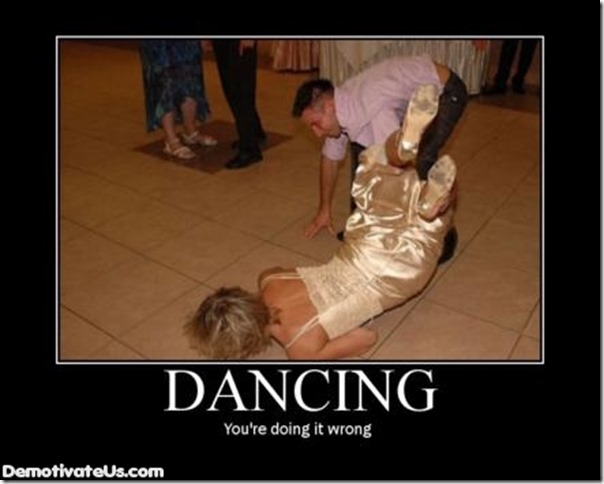 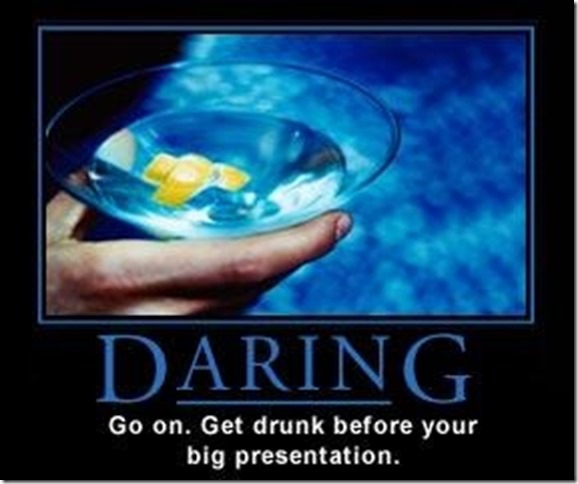 Let’s go to some mail, shall we? Surely.  Don’t call me Shirley!

Thanks Dale.  I appreciate your support and your enjoyment.  I agree.  Laughter, sometimes, is indeed the best of medicines.  In times like these, sometimes all we can really do is laugh … at the situation, at ourselves, at our friends, loved ones, and neighbors.  We all know it is in good fun and certainly shouldn’t take it seriously.

And if I’ve hurt anyone’s feelings in anything I’ve said…well…I’m very sorry … and you’re probably reading the wrong ezine.

WHEN IS A PANDEMIC A BLESSING? Because we were in our homes, when the *earthquake hit, no children were hurt by damaged school buildings.

In Italy, a bridge collapsed, however, there were only two vehicles on it, since everyone is quarantined.
THERE IS GOOD IN ALL THINGS! Look to the good side of this epidemic.

I liked the funny where the fence was taken down so they could have their drink and chat, virus safe. My friend and I, now pour ourselves a drink, then talk on the phone. It is still too cold here to be sitting outside.

Sadly, another friend has the virus, is quarantined at home for now. She is so excruciatingly sick!

We have had over 800 aftershocks, anywhere from just a 1.5 to 4.6
SALT LAKE CITY — Officials are still tallying, but the path of destruction left behind by last month’s 5.7 magnitude earthquake is racking up tens of millions of dollars in damage.
So far in Salt Lake County, inspectors have found the quake has damaged 107 government buildings — INCLUDING DOZENS OF SCHOOLS — with early estimated costs hitting the $48.5 million mark, according to Clint Mecham, Salt Lake County Emergency Management division chief.
That’s not a final total — and it doesn’t even include homes and businesses.
In Salt Lake County, the quake damaged at least 570 privately owned buildings with costs currently tallied at $1.9 million — but Mecham said that figure is likely to climb as claims are processed.

I truly enjoy getting emails and messages from you and I guess it’s special to be able to see the good and blessings in everything.  I will admit that I find it hard, sometimes to find those silver linings.  Thank you for being there to point me in the right direction at times.  I am sorry that your home state is suffering as badly as it is.  It sounds like Utah is getting a healthy dose of the worst of it.   I know there are states out there that are hurting worse, so keep your chin up, which I know you are good at and prayers and blessings for your friend who’s sick.

Any of you middle aged men out there who don’t recognize yourselves in that picture are lying to yourselves!

Look for it…you’ll see it.

And another one the kids won’t get. 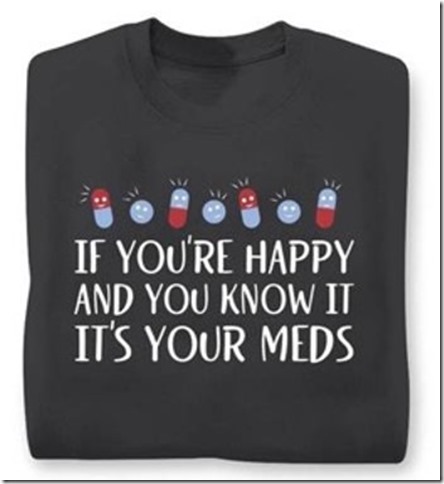 And that’s another one for today folks.