Another cold snowy, blowy, week.  We’ve had wind-chills all the way down to –15 F!  That’s fifteen degrees below zero!  That’s forty-seven (47) degrees colder than the temperature at which water freezes!  That’s pretty damn cold!

Thank goodness my blood has a high level of ethanol in it, which really helps when it comes to keeping me from, at best, falling into hibernation and at worst, plunging to the ground unconscious from several thousand feet up in the air.  As I’m sure Lethal has told you many times before, that NEVER works out well for me.

I’m sure there’s a joke in there somewhere, but it’s pretty lame.  So, if it’s so lame, why did I include it in today’s issue?
Honestly?
I have no idea.  There’s probably a deep psychological issue that was just uncovered in me. 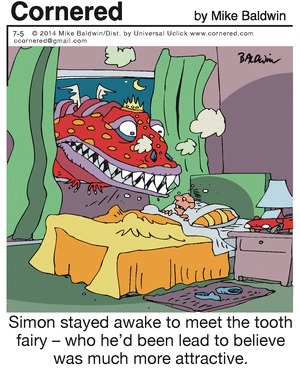 Donald MacDonald from the Scottish Highlands, went to study Law at a renowned and austere English university and was living in the hall of residence with all the other students there.

After he had been there a month, his old mother came to visit him.

“And how do you find the English students, Donald?” she asked.

…The one on the other side screams and screams all night.”

“Oh Donald! How do you manage to put up with these awful noisy English neighbors?” She asked her son.

Donald replied enthusiastically: “Mother, I do nothing. I simply ignore them. I just stay here quietly, playing my bagpipes.”

Mrs. Dragon snapped this picture of me a couple of Christmases ago.  I get pretty excited when I wait for Santa.

Now, I am a fan, like many of you, of the movies.  But, this is going just a little too far.

This one is both gross and hilarious!  Poor thing is SO tired and SO messy!

Thanks to Papa Dragon Most Senior for this next one.  Put your coffee down, you don’t want to spit it everywhere!

Now, this next one is just pure genius!  Easier than using my snow blower!

We all know there are scams everywhere and this one is no different.  I would normally not bother with something that I think is kind of obvious, but since there are so many of you who are drunkards enjoy a nice glass of wine, I thought this was important to share.  Again, it comes from America’s Digital Goddess, Kim Komando.

You are told that you only have to purchase one bottle of wine valued at $15 or more. In return, the scammer says that you will receive between six and 36 wine bottles or gift cards. The return depends on how many wine drinkers join.

Warning! If you see a post like this, DO NOT SEND MONEY! This is a scam and you will not receive any wine.

The “holiday wine bottle exchange” is similar to how a pyramid scheme works. The U.S. Postal Service said this is basically a chain letter, which is illegal because it’s a form of gambling. So, even if you did receive wine in return, it would be illegal.

Police are asking people to watch for any of these posts and not to fall for this hoax. You also should report the post to Facebook if you see one.

This isn’t the first scam we’ve seen on Facebook and it definitely won’t be the last. It wasn’t long ago that a similar scam was being passed around, it was called the “secret sister gift exchange.”

A great rule to live by is if it seems too good to be true, it probably is.

So, here’s my cousin, sitting down with the counselor.  They often have very long talks and the counselor is said to do a great job.  Which is which?  Oh….that’s my cousin Suzanne talking with Mr. Fine.  He’s the red one.

You may have noticed that I haven’t put that much Christmas stuff in this issue.  That’s for two reasons.  #1) I don’t want to over do Christmas so that you are sick of it by the time the holiday finally does get here and b) I don’t want to step on Lethal’s toes and possibly use something that he is going to use.

Okay, so you’re buying all that, right?