Posted on October 19, 2016 by lethalleprechaun

Before we get started today please excuse me for a moment whilst I gloat.

How about them Texans there Impish? Sure as heck roped and corralled them Colts of yours huh?

OK, I’m done, back to the business at hand.

Owing to an obligation I have next Wednesday which has the potential to be either a one day inconvenience or lasting quite a while and taking up a great deal of my time as well as being in keeping with Impish’s wish to do and contribute more to the holiday issues thereby relieving me of some of the burden, Impish will be responsible for the Halloween Issue this year. It’s sure to be either a real treat (at least for me who won’t have had to put it together) or one heck of a trick (you know those things you get as a condolence from those too cheep to give you a decent treat).

Damn it! I knew that tasted like decafe coffee

SC! Chai! Find the clown that swapped by Brown Gold for this crap now! 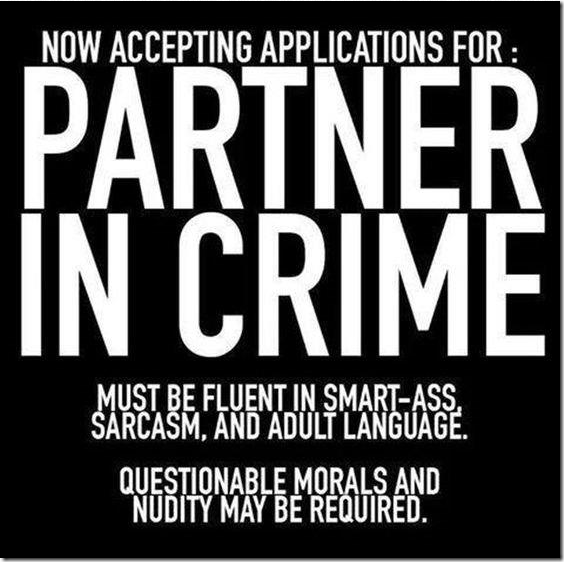 Now before all you Impish supporters start in, its not anything personal or to do with Impish’s (lackluster) job performance. I just figure after the way he went after Hillary and the Dems in his last issue it’s only a matter of time before we see those Clinton Foundation Hearses cruising the area looking for him. We’ve already got enough broomsticks in the area the mosquitoes are filing near air collision complaints.

Huh! Impish has been complaining of back problems recently. You don’t suppose… NAH! Inflating a football is work, he’d never voluntarily go near manual labor unless he thought is was a Mexican Lawn Service he could hire.

A very elderly couple were having an elegant dinner to celebrate their 75th wedding anniversary.

The old man leaned forward and said softly to his wife: “Dear, there is something that I must ask you. It has always bothered me that our tenth child never quite looked like the rest of our children.

Now I want to assure you that these 75 years have been the most wonderful experience I could have ever hoped for, and your answer cannot take all that away. But, I must know, did he have a different father?”

The wife dropped her head, unable to look her husband in the eye, she paused for moment and then confessed: “Yes. Yes he did.”

The old man was very shaken, the reality of what his wife was admitting hit him harder than he had expected. With a tear in his eye he asked:

Again, the old woman dropped her head, saying nothing at first as she tried to muster the courage to tell the truth to her husband.

Many of them have more tattoos than their Dad too!

I never knew Deliverance was set in Ohio!

Maybe we should try shooting them all in the nose. Or at least punching them there…with a baseball bat.

Now those clowns ARE scarey!!

The Top 5 Ways the Presidential Race Could Get Even Weirder

5.) Cthulhu rises from the deep and devours the shrieking souls of the living, saving America from the presidency of either candidate.

4.) Hillary trips and spills the contents of her purse, which does indeed include Bill’s testicles.

3.) PRESS RELEASE, Republican National Committee: “For the remainder of the presidential campaign, the part of Donald Trump will be played by understudy Scott Baio.”

2.) The third debate is held in Flint, Michigan. The rules: Tell a lie, do a shot of tapwater.

1.) All Americans are perfectly satisfied with the result. 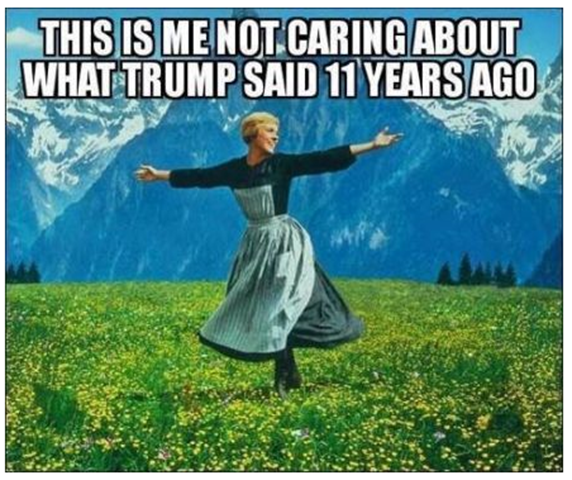 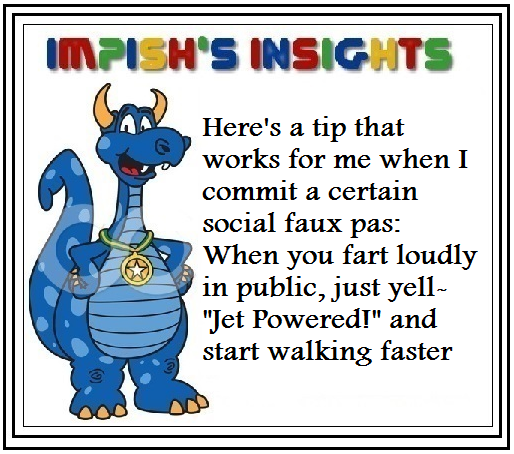 This ridiculously creamy tortellini version might top them all. Packed full of caramelized onion and bacon, with a generous helping of Velveeta for maximum smoothness (though you can use any cheese you like), this pasta is decadently delicious and we guarantee everyone you serve it to will rave about it. You can’t lose with this one! 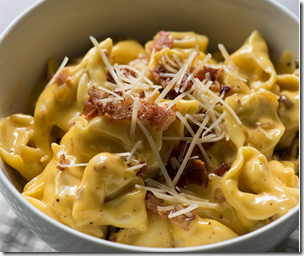 While the onions caramelize, bring a large pot of salted water to boil and cook pasta according to package instructions, or until al dente. Drain the pasta, reserving 1/4 cup cooking water, and return pasta to pot over medium-low heat.

Gently stir in cubed Velveeta, heavy cream and butter, then season generously with salt and pepper, and add in nutmeg.

Fold in caramelized onions and sprinkle in 1/2 crumbled bacon.

Consider other types of filled tortellini and different proteins other than bacon. For example mushroom filled and browned ground beef make a killer combo, especially when topped with shredded Swiss cheese.

Want to go all out really over the top? Lump Crab or Lobster meat,  Alfredo sauce and fresh peas will leave your diners speachless

Ok so I’ll admit this next one might be stretching things just a tad, but you folks need to understand, he challenged me!

After all those things he said about my culinary skills just two weeks ago, he challenged me!

See we ere talking about the lasagna recipes and how he could go almost an entire day eating nothing but lasagna but how that ran the risk of Garfield syndrome (so fat and happy all you can do is couch potato for 24 hours in post lasagna lethargic bliss). I made a comment about how it wasn’t really a true day because there was no dessert lasagna in the mix so far.

Then it happened, that’s when Impish went and stuck his size 34EEEEE foot right in it.

Basically he said it wasn’t possible to do a true lasagna dessert. I said I wasn’t so sure that off the top of my head I could think of several avenues of possible exploration. That’s when it happened and he challenged me to put a dessert lasagna where my mouth was.

Well that was it, game on. Don’t through an oven mitt down to this leprechaun! I’ll put my fist in it and pummel you with it. It was game time and here are the results.

Preheat oven to 350°F (175°C).
Combine Cheddar cheese, ricotta cheese, egg, white sugar, and almond extract in a medium bowl.
Blend well.
Spread one can apple pie filling over the bottom of a greased 9×13-inch pan.
Layer with half of the noodles, and then the cheese mixture.
Layer again with remaining noodles, and the second can of pie filling.
Combine flour, 6 tablespoons brown sugar, oats, cinnamon, and nutmeg in a small bowl.
Cut in butter until crumbly, DO NOT OVERWORK.
Sprinkle over top.
Bake in preheated oven for 45 minutes.
Cool for 15 minutes.
Meanwhile, prepare garnish by blending sour cream and 1/3 cup brown sugar in small bowl until smooth.
Cover, and refrigerate.
Serve warm apple lasagna with sour cream garnish.

Make that concession speech short but heartfelt & sincere Impish. Admitting you’re my food bitch would be a nice gesture too.

MIAMI – A new billboard proclaiming that ISIS “sucks” has popped up in South Florida.

The billboard is part of a campaign organized by Sound Vision, a public relations firm that is looking to make a distinction between ISIS and Muslims.

“A group of American-Muslim professionals organized like-minded concerned Muslims to raise funds for this campaign,” said Mohammad Siddiqi, executive director of Sound Vision. “These are common folks, and the billboard is their declaration of independence from ISIS.”

The billboard is similar to those that were placed in Chicago, Phoenix and St. Louis.

I believe in being the kind of man who, when my feet touch the floor in the morn', causes the Devil to say "BUGGER ME! HIMSELF IS UP!" ======== I'm a White Married Heterosexual who fervently believes in the war(s) we are fighting, the Second Amendment which I plan on defending with my last breath and my last round of ammunition as well as Arizona's stringent law on Immigration and the need for the border wall. I'm a right of center Con-centrist with Tea Party & Republican sympathies who drives an SUV. I am a Life Time Member of the NRA, a Charter Member of the Patriots' Border Alliance and North American Hunters Association. If there is a season for it and I can shoot one I'll eat it and proudly wear its fur. I believe PETA exists solely to be a forum for Gays, Vegetarians, Hollywood snobbery to stupid to get into politics and Soybean Growers. The ACLU stopped protecting our civil liberties sometime after the 1960s and now serves its own bigoted headline grabbing agenda much in the same way as the Southern Poverty Law Center. I am ecstatic that WE the PEOPLE finally got mad enough to rise up and take back the Government from WE the ENTITLED and reverently wish the Liberals would just get over the loss and quit whining/protesting all the time. After all they're just reaping what they've sown. I am Pro-choice both when it comes to the issue of abortion AND school prayer. I believe in a government for the people, by the people which represents and does the people's will. Therefore I an Pro States rights and mandatory term limits but against special interest group campaign contributions and soft money. I think that sports teams who allow their players to sit or take a knee during the National Anthem should be boycotted until the message is received that this is not acceptable behavior for role models for children. I believe Congressional salaries should be voted on bi-annually by the people they represent and not by themselves. I think Congress should be subject to every law they pass on the populace including any regarding Social Security or Healthcare. Speaking of the Healthcare bill (or con job as I see it) I hope Trump will overturn it and set things back to normal. I oppose the building of an Mosque or ANY Islamic center at or within a 10 mile radius of Ground Zero in New York. I will fight those in favor of this until hell freezes over and then I will continue to fight it hand to hand on the ice. Further I think the ban on immigrants from certain nations known to harbor and promote terrorism is a justified measure, at least until we can come up with better methods of vetting and tracking those non citizens we allow in the country. We did not inflict this measure on them those who refuse to point out, denounce or fight radical religious terrorism brought this upon themselves.
View all posts by lethalleprechaun →
This entry was posted in Uncategorized and tagged Centrist, humor, Impish Dragon, Jokes, Lethal Leprechaun, recipes. Bookmark the permalink.