Well, things are going to hell in a hand basket.  They impeached Trump for a second time for things he didn’t do and for a second time, it will be a worthless jester.  Spending our money on something they shouldn’t be.  Nancy Pelosi needs to be fired.  Don’t we have that right, as her employer?  Can’t California get it’s head out of it’s ass long enough to do even that much?  We don’t ask much of you, but can’t you guys do that for us?

This country needs to heal in a bad way.

Not sure that will help, but it can’t hurt.

Sorry, I couldn’t help myself.

Anyway, today is Thursday and had Mrs. Dragon at the eye doctor for her final eye surgery.  It’s all done.  She had four and I had four … eight eye surgeries between two people in the same damn year…ain’t that a kick in the pants.  I know it’s a shot in the wallet, that’s for sure!  Even with insurance.  So, we just got home and because she was worried, she didn’t sleep last night … at least not well, so she went to bed.  And I took the day off work to keep an eye on her, not that there’s much of that left, so I’m spending time with you and Izzy and I are going to go to the grocery in a bit … the exciting day of a dragon.  Beats working, I guess.

So, rather than me rambling or getting pissed off, which I’m trying really hard not to do, let’s get to some laughter, shall we?

Well, you blame your farts on the dog … poor dog, gets blamed for everything.

I found this to be a very interesting official statement … 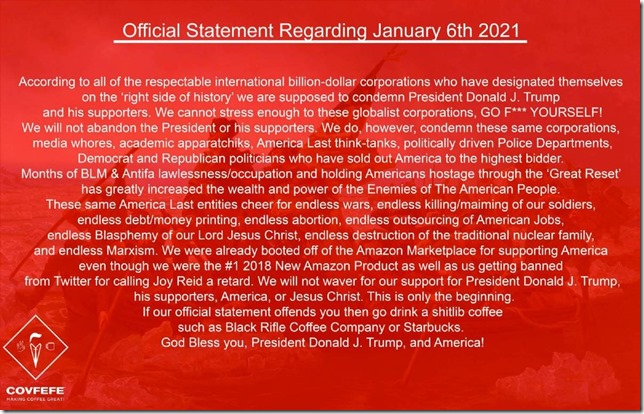 Sorry if it’s a bit small.

She was always smiling from the way he made her feel.  He was hot, dark, and steamy.  H made her life have meaning.  She couldn’t live without him.  And she didn’t want to…

Coffee.  He was coffee.

Dragon.  He was Dragon. 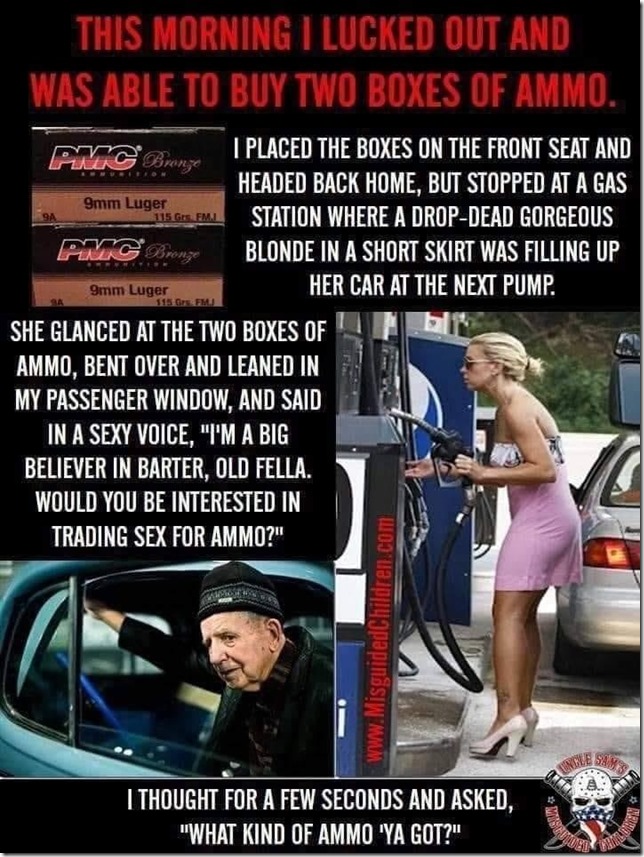 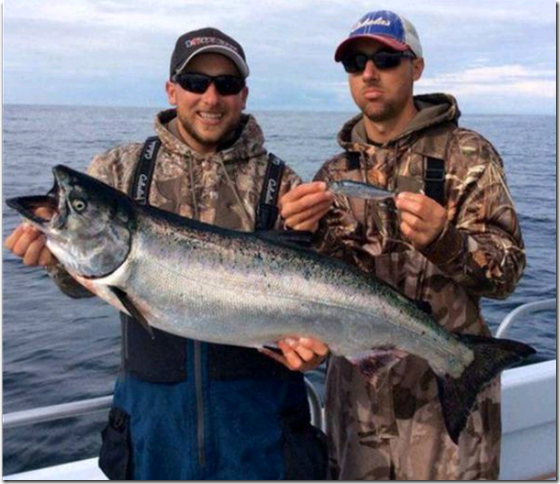 Jobs People Look Down On

Jobs People Look Up To 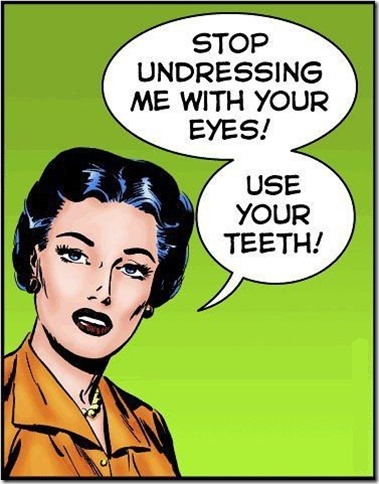 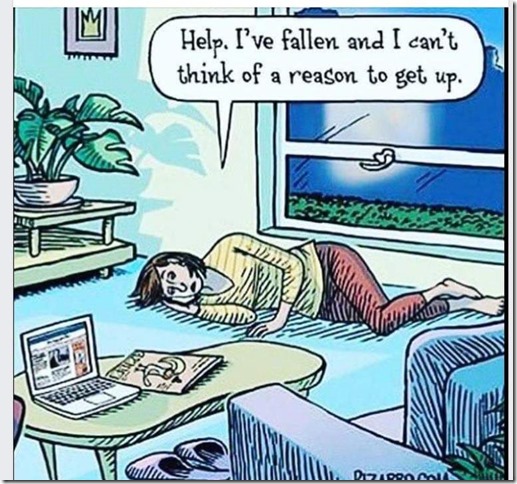 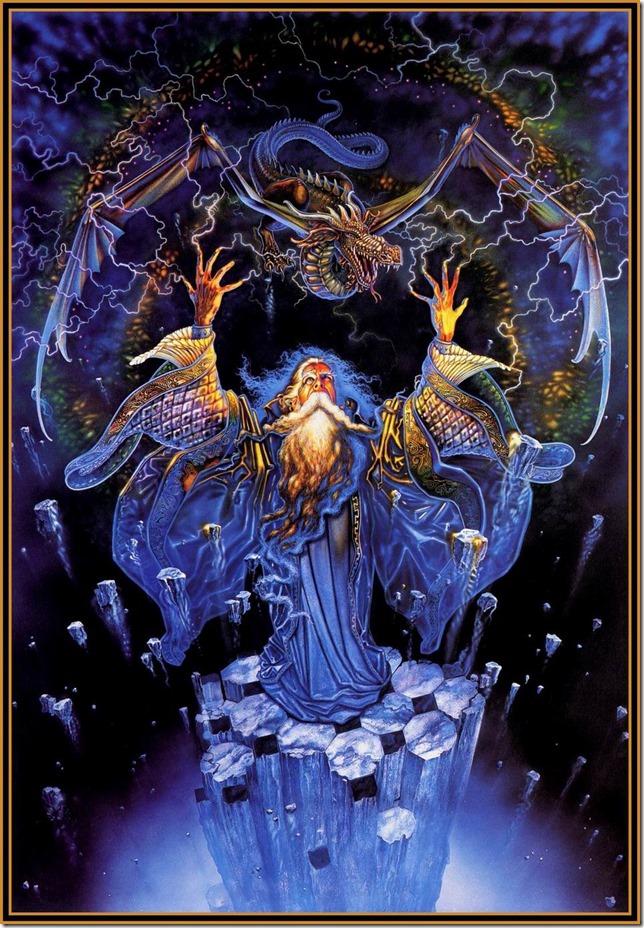 When Uncle Sal said he was going to pull a rabbit out of his hat, him and his audience both were badly surprised … and scarred for life.

Whenever I think I have had a horrible day at work, I remind myself that Nancy Pelosi has a gynecologist.

8 Year-old:  I feel like you’re always making up rules and stuff.

8 Year-old:  Like if we don’t pick up our room a portal will open and take us to another dimension.

Me:  Well, that’s what happened to your older brother. 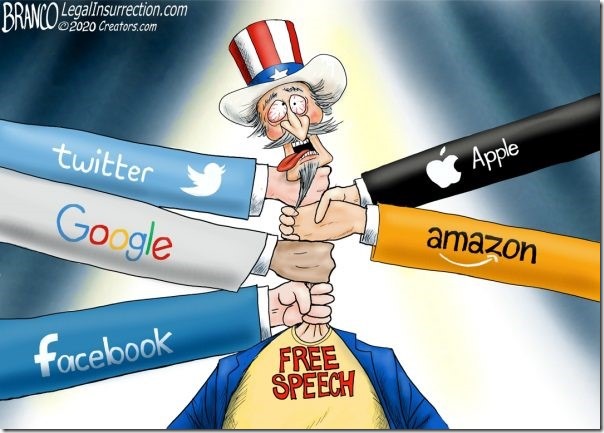 Okay, let’s hit some of the comments and stuff that I’ve gotten lately…

So did the mess up, also mess up the issue number? What did happen to 1848?
The Revolutions of 1848, known in some countries as the Springtime of the Peoples or the Spring of Nations, were a series of political upheavals throughout Europe in 1848. It remains the most widespread revolutionary wave in the European history.
In 1848, a violent storm of revolutions ripped through Europe. The torrent all but swept away the conservative order that had kept peace on the continent since …
Oh, now I understand!

1848 was indeed published … on the Monday that it was supposed to be published on.  I just checked … it’s there, in case any of you missed it, you can scroll back on the website and read it…as far as the rest of your comment goes, Leah – okay.  If you say so.  Your mind must be quite an interesting place to visit.

Let me add 1 more to your list…why do we drive on the parkway and park in the driveway? Yep old and to much time on my hands….and a song stuck in my head now…Thanks…Dragon Laughs are the only ones I get lately…stay cool keep it correct….don’t want you blocked or removed.

Marsha … I haven’t kept it correct in almost 15 years of doing this, I don’t suppose I’m going to keep it correct now.  So, I suppose I should apologize now, if I end up getting kicked off line for pissing people off.  It’s really hard to keep my mouth shut about things … especially things that piss me off.  Like this whole armed march on Washington that’s being planned for next week … we don’t do that crap.  We’re the good guys.  And it’s been bothering me the whole time.  And now, just five minutes ago, I got a message on back channels that I’m hooked up to, that pretty much shows that it’s all bullshit.  Let me give you a little example of what I mean.

Here’s the poster that’s going around.  Not for promotion, but to show you what’s out there:

OKAY, WE DON’T DO ARMED PROTESTS!  That’s the first bullshit point to come across to me, but this is what someone else pointed out to me …

…based on the design of the flyer, the language, and the omissions, the upcoming rallies have all the indication of being a false flag.

And compared to past BLM flyer … 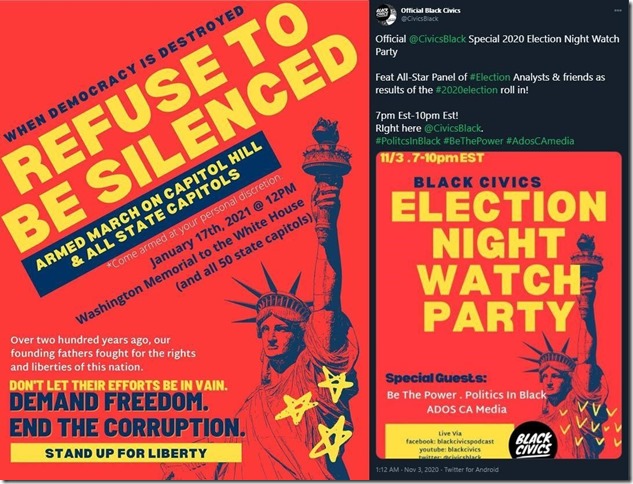 So … you tell me, who’s REALLY trying to cause problems in our country.  And knowing that every penny that gets donated to BLM ends up in democratic pockets …

CAN SOMEBODY PLEASE OPEN YOUR FRIGGIN’ EYES!!!!!

So yeah … Marsha … it’s really hard for me to keep it correct.  All of the above was open source, so I don’t have a problem sharing it with you guys.  I just wish that someone from the media would pick up on this.  But, we all know that they are in the pockets of the idiots as well.

So, I’m pretty sure that I’ve done this joke before, but it cracks me up every time, so let’s do it again …

Me:  Every now and then I get a little bit lonely and you’re never comin’ round 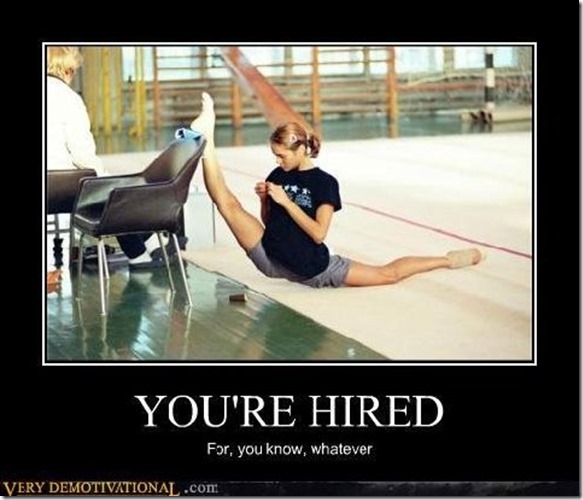 Coulda used that one a couple of times …

In future China will employ millions of American workers and dominate thousands of small communities all over the United States .

Chinese acquisition of U.S. businesses set a new all-time record last year, and it is on pace to shatter that record this year.

The Smithfield Foods acquisition is an example. Smithfield Foods is the largest pork producer and processor in the world. It has facilities in 26 US. states and it employs tens of thousands of Americans. It directly owns  460 farms and has contracts with approximately 2,100 others.

But now a Chinese company has bought it for $ 4.7 billion, and that means that the Chinese will now be the most important employer in dozens of rural communities all over America .

Thanks in part to our massively bloated trade deficit with China, the Chinese have trillions of dollars to spend. They are only just starting to exercise their economic muscle.

It is important to keep in mind that there is often not much of a difference between “the Chinese government” and “Chinese corporations”.  In 2011, 43 percent of all profits in China were produced by companies where the Chinese government had a controlling interest in.

Last year a Chinese company spent $2.6 billion to purchase AMC entertainment – one of the largest movie theater chains in the United States. Now that Chinese company controls more movie ticket sales than anyone else in the world.

But China is not just relying on acquisitions to expand its economic power.
“Economic beachheads” are being established all over America . For example, Golden Dragon Precise Copper Tube Group, Inc. recently broke ground on a $100 million plant in Thomasville , Alabama. Many of the residents of Thomasville , Alabama will be glad to have jobs, but it will also become yet another community that will now be heavily dependent on communist China .

And guess where else Chinese companies are putting down roots?
Detroit.
Chinese-owned companies are investing in American businesses and new vehicle technology, selling everything from seat belts to shock absorbers in retail stores, and hiring experienced engineers and designers in an effort to soak up the talent and expertise of domestic automakers and their suppliers. If you recently purchased an “American-made” vehicle, there is a really good chance that it has
a number of Chinese parts in it. Industry analysts are hard-pressed to put a number on the Chinese suppliers operating in the United States .

China seems particularly interested in acquiring energy resources in the United States.
For example, China is actually mining for coal in the mountains of Tennessee.
Guizhou Gouchuang Energy Holdings Group spent 616 million dollars to acquire Triple H Coal Co. in Jacksboro, Tennessee. At the time, that acquisition really didn’t make much news, but now a group of conservatives in Tennessee is trying to stop the Chinese from blowing up their mountains and taking their coal.

And pretty soon China may want to build entire cities in the United States just like they have been doing in other countries. Right now China is actually building a city larger than Manhattan just outside Minsk , the capital of Belarus.

Are you starting to get the picture?
China is on the rise. If you doubt this, just read the following:

# When you total up all imports and exports, China is now the number one trading nation on the entire planet.

# Overall, the U.S. has run a trade deficit with China over the past decade that comes to more than 2.3 trillion dollars.

# China has more foreign currency reserves than anyone else on the planet.

# China now has the largest new car market in the entire world.

# China now produces more than twice as many automobiles
as the United States does.

#After being bailed out by US. taxpayers, GM is involved in 11 joint
ventures with Chinese companies.

# China is the number one gold producer in the world.

# The uniforms for the U.S. Olympic team were made in China.

# 85% of all artificial Christmas trees the world over are made in China.

# The new World Trade Center tower in New York is going to include glass imported from China .

# China now consumes more energy than the United States does.

# China is now in aggregate the leading manufacturer of goods in the entire world.

# China uses more cement than the rest of the world combined.

# China is now the number one producer of wind and solar power on the entire globe.

# China produces more than 90 percent of the global supply of rare earth elements.

# China is now the number one supplier of components that are critical to the operation of any national defense system.

# In published scientific research articles China is expected to become
the number one in the world very shortly.

And what we have seen so far may just be the tip of the iceberg.

For now, I will just leave you with one piece of advice –
learn to speak Chinese.

You are going to need it

That essay doesn’t even talk about all the land China is buying up through proxies across our once great nation.  That ought to scare the hell out of you.  I know it does me.  And Mrs. Dragon wonders why I get so upset sometimes.

Yeah … I got nothin’

Let’s do some more mail …

one of the best ever, keep it up. WE need you.
i know what you mean about the lie that is transpiring. i’ve developed an affliction where my head just keeps swiveling side to side.

I’m with you 100% dowchuckil.  And when my head swivels, fire tends to go EVERYWHERE!  It can be a real mess.

You know … that’s a pretty good idea … You could put that right out in the open and the U.N. troops would never think to look there!!

You are not trash!

Because trash can be disposed of.

But, we’re stuck with you.

I’m a huge fan of
SPACE
Both Outer and Personal

Ultimately, I just want someone who knows which songs not to talk over.

And with that little gem, we’re going to call it a day.  Be well my friends.  Stay safe, stay healthy and keep laughing.