It’s a damn conspiracy!  I have to bundle up in a coat and hat and gloves and scarf and … do you know how friggin’ silly a dragon looks in a hat and scarf? … just to pop out back and enjoy an early evening cigar and Jameson!  IT’S NOT RIGHT I TELL YOU!!!!

MOTHER NATURE!  YOU AND I NEED TO HAVE WORDS!

Yes, dear, you wanted to talk?

A blonde wanted to go ice fishing. She’d seen many books on the subject, and finally getting all the necessary tools together, she made for the ice.

After positioning her comfy footstool, she started to make a circular cut in the ice. Suddenly, from the sky, a voice boomed, “THERE ARE NO FISH UNDER THE ICE.”

Startled, the blonde moved further down the ice, poured a thermos of cappuccino, and began to cut yet another hole. Again from the heavens the voice bellowed, “THERE ARE NO FISH UNDER THE ICE.”

The blonde, now worried, moved away, clear down to the opposite end of the ice. She set up her stool once more and tried again to cut her hole.

The voice came once more, “THERE ARE NO FISH UNDER THE ICE.”

She stopped, looked skyward, and said, “IS THAT YOU LORD?”

The voice replied, “No, THIS IS THE MANAGER OF THE HOCKEY RINK.” 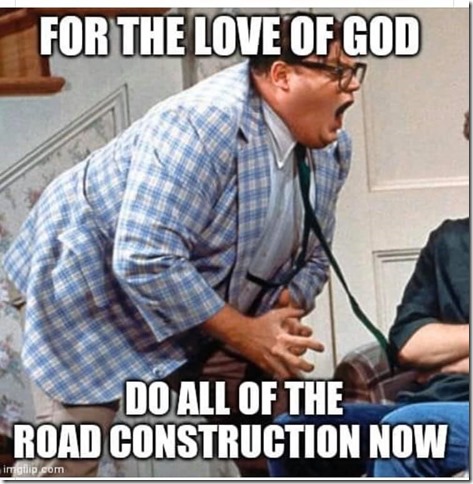 Home invasions should probably decline.  Everyone is home with guns and enough bleach and paper towels to clean up the scene. 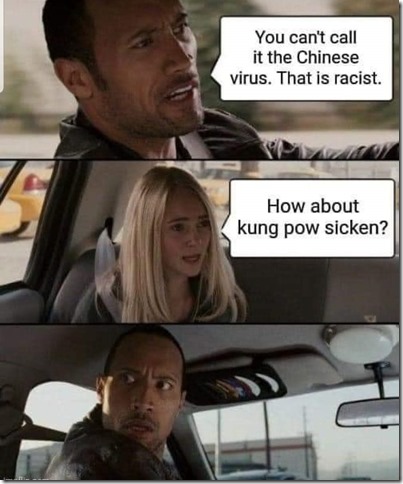 Anyone else planning on telling their child that the Elf on the Shelf didn’t survive the Coronavirus?  Just me?  Ok.

We’re all gonna be so bored by the end of this that we’ll all know how to fold a fitted sheet.

FACT: In 4 weeks 88% of blondes will disappear from the face of the earth.

We’re teaching people how to wash their hands.

I apologize for these puns, but you can blame them on Brenda…

1. The fattest knight at King Arthur’s round table was Sir Cumference. He acquired his size from too much pi.

2. I thought I saw an eye doctor on an Alaskan island, but it turned out to be an optical Aleutian .

3. She was only a whiskey maker, but he loved her still.

4. A rubber band pistol was confiscated from algebra class, because it was a weapon of math disruption.

5. No matter how much you push the envelope, it’ll still be stationery.

6. A dog gave birth to puppies near the road and was cited for littering.

7. A grenade thrown into a kitchen in France would result in Linoleum Blownapart.

9. A hole has been found in the nudist camp wall. The police are looking into it.

11. Atheism is a non-prophet organization.

12. Two hats were hanging on a hat rack in the hallway. One hat said to the other: ‘You stay here; I’ll go on a head.’

13. I wondered why the baseball kept getting bigger. Then it hit me.

15. The midget fortune-teller who escaped from prison was a small medium at large.

16. The soldier who survived mustard gas and pepper spray is now a seasoned veteran.

18. In a democracy it’s your vote that counts. In feudalism it’s your count that votes.

19. When cannibals ate a missionary, they got a taste of religion.

21. A vulture boards an airplane, carrying two dead raccoons. The stewardess looks at him and says, ‘I’m sorry, sir, only one carrion allowed per passenger.’

22. Two fish swim into a concrete wall. One turns to the other and says ‘Dam!’

23. Two Eskimos sitting in a kayak were chilly, so they lit a fire in the craft. Unsurprisingly it sank, proving once again that you can’t have your kayak and heat it too.

24. Two hydrogen atoms meet. One says, ‘I’ve lost my electron.’ The other says ‘Are you sure?’ The first replies, ‘Yes, I’m positive.’

25. Did you hear about the Buddhist who refused Novocain during a root canal? His goal: transcend dental medication.

26. There was the person who sent ten puns to friends, with the hope that at least one of the puns would make them laugh. No pun in ten did.

Okay, so some of them weren’t bad Brenda…but some of them…. oh dear!  LOL! In all honesty, thank you so much for your contribution and thank you all for all of your contributions, I wish it were possible to thank each and everyone of you individually, but the way that I save posts and pictures for use, it’s just not possible, but when I can, I will.  But, know, that I KNOW who you are and that all of you are deeply appreciated and loved for taking the time and making the effort to be a part of the team. 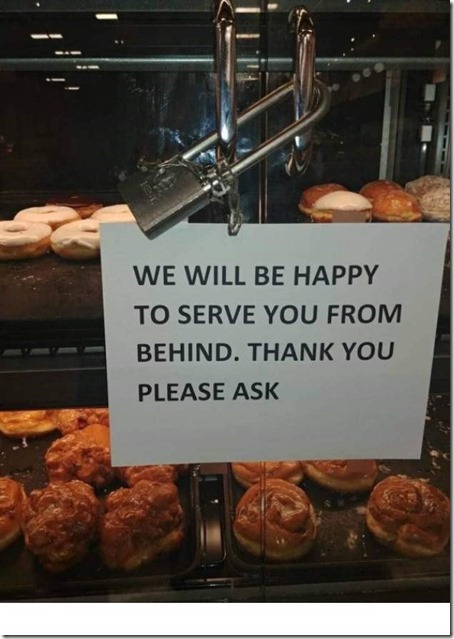 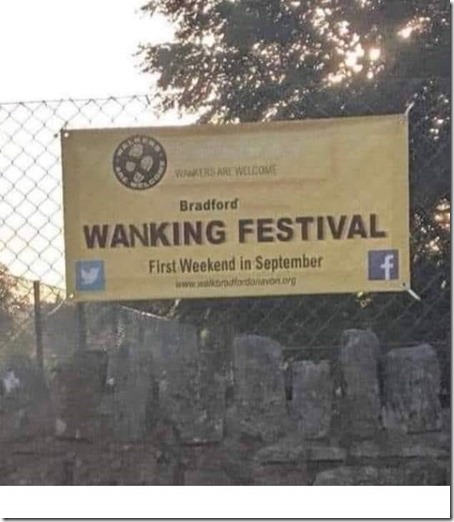 And I thought the damn Testicle Festival was bad! 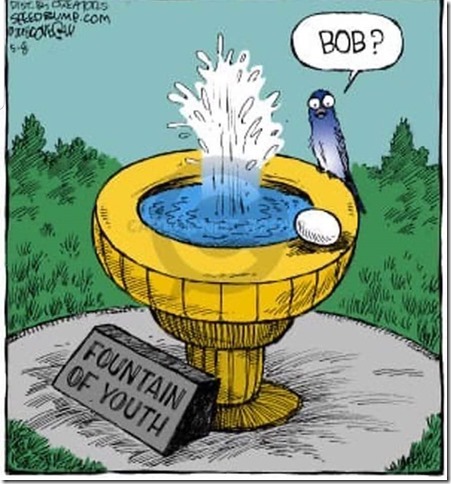 I’m actually kind of handsome when you’re drunk and the light is low and there’s no other dudes around and you have low standards. 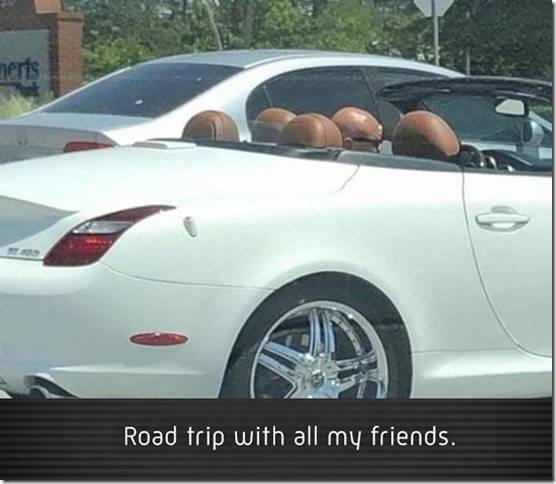 Two of my friends have never met each other.  Before they spoke, I told both of them that the other is a bit deaf.  They shouted at each other for a few minutes before they realized that I’m a bit of a jerk. 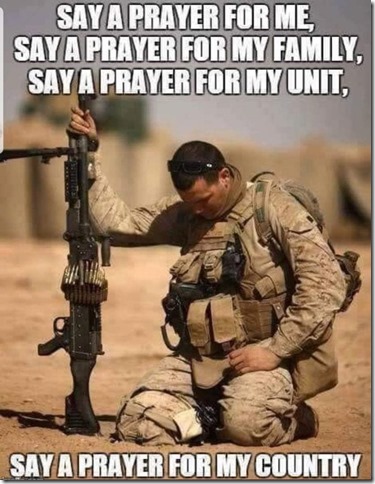 You only need two tools in life … WD-40 and duct tape.  If it doesn’t move and it should, use the WD-40…if it moves and it shouldn’t use the duct tape.

If you can’t fix it with a hammer, you’ve got an electrical problem.

Some people are like slinkies…not really good for anything, but they bring a smile to your face when pushed down the stairs.

Oh damn!  I must’ve really pissed her off this morning…crap!  I might need to go into hiding.  Okay, okay.  I’ve got my emergency bugout bag packed.  The gear is ready to go, I’ve got the emergency cave in a non-disclosed location…I can go back down and check on Peter in … oh best not to mention the location although Santa can’t be involved this time…why am I panicking, you ask?!?!

Because it’s bloody well snowing outside!  And it’s the middle of APRIL!  I must’ve really pissed off the old battle axe mother nature!

Impish, dear, did I hear you say something about going down to see Peter in Australia again?

Now, Impish dear, you know how that annoyed Mrs. Claus the other day when you and the boys went down there and you know what good friends her and I are…

(Holy crap!  I’ve never seen a volcano spring out of nowhere in my backyard before!)

Now, don’t you think it would be better if you just stayed right WHERE YOU ARE LIKE A GOOD LITTLE DRAGON!

Good, now go on back to what you were doing, enjoy the snow, and I’ll make you some oatmeal raisin cookies.  I know those are your favorites.

You guys go back to the laughs…I need to go bury a volcano before it erupts.

Dear Gawd, why would you wear something like that?

So, I was going to tell you guys about the trip down to see Peter in Deception Bay, but I guess Santa got in trouble with Mrs. Claus for going down there, who knew he had so many girl friends down there!  But, now I guess there’s a gag order on the whole trip.  I suppose Peter can tell you about it, but I can’t so…. 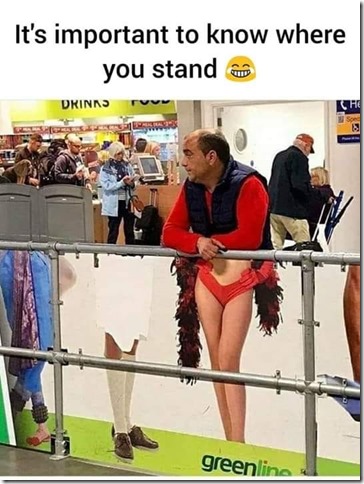 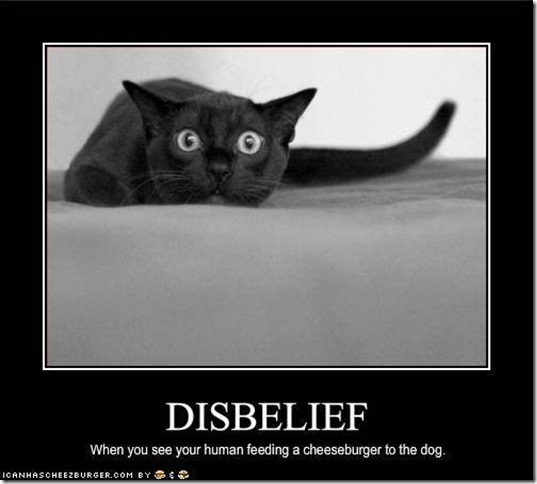 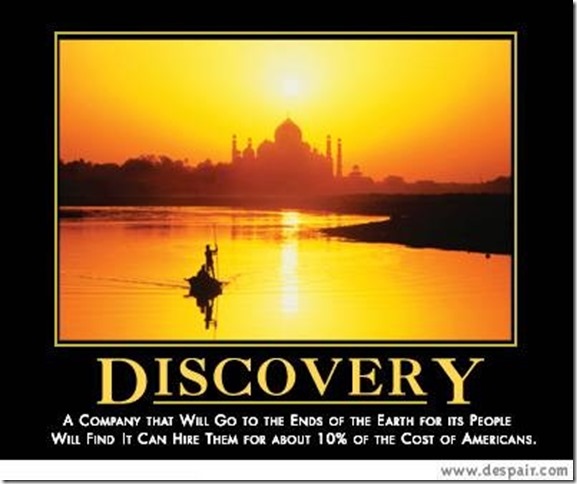 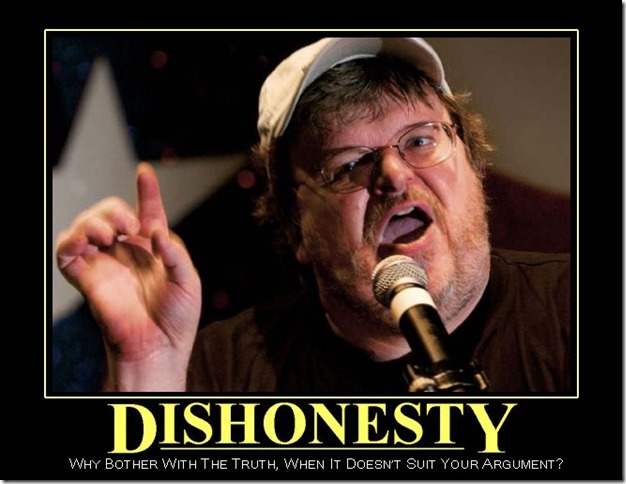 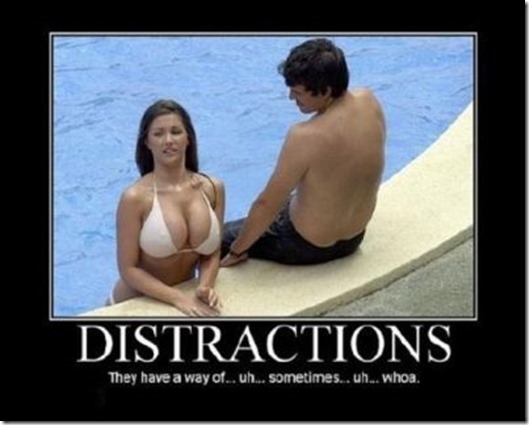 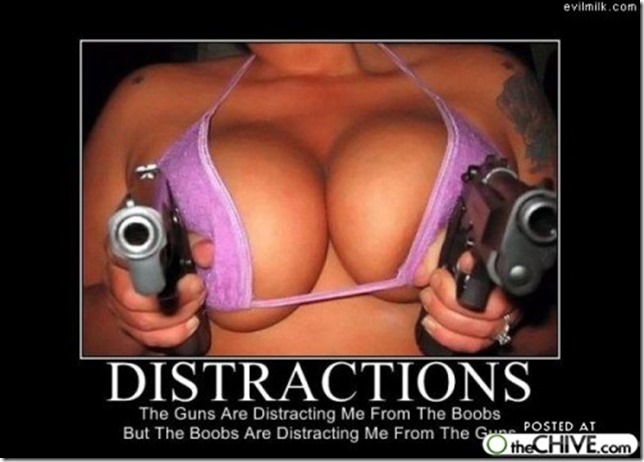 Here’s some mail from Leah

I actually like this ‘order and wait’ grocery shopping. Then thought of items I should have ordered. This morning I found I can keep adding to my order up to the night before I pick it up on Tuesday, April 21.
Wish I could correct my husbands To Do list as easily.

So, around 9 pm last night, we had a 4.2 hit us. Seems it is an aftershock, not of the 5.7 that hit us, but of a “mini” quake we had a few days ago. That makes me nervous when the aftershocks are bigger than the original “mini quake” located by Saltair, on the edge of the Great Salt Lake.
It’s good to have a bigger worry than the virus.

Okay, so many things are wrong with this message, Leah.  First, your poor husband.  Give the poor guy a break.  It’s bad enough you have a Honey Do list for him, but to want it computerized so you can continually update it on the fly is just too much.  Write it out on a piece of paper so he can lose it like an other self respecting husband.

Secondly, being happy for an earthquake so you can forget about the virus…dear, we need to get you a break.  I’d send Santa round yours for a little pick me up, he is a ladies man, don’t you know, but he’s in a bit of dutch with his old lady at the moment and I just now got the snow to stop flying, so … I’m thinking … I’ve got an in with the tooth fairy.  He owes me a favor.  Now, he’s not as much “fun” as Santa, but if you put a couple of shots into him (he’s a Jameson’s guy, too) you’ll be surprised. 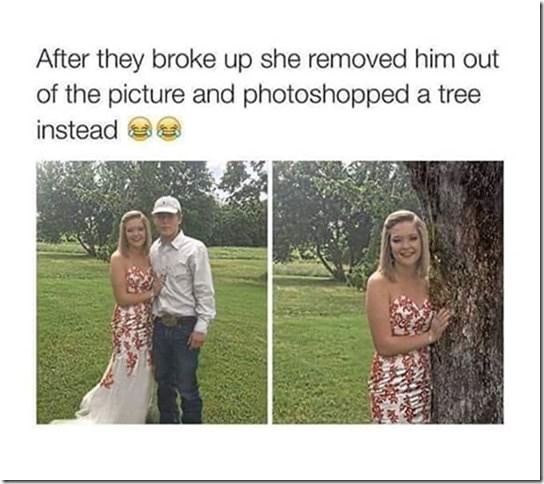 This one comes to us from John S.

A message of hope for these strange times.

1. There are no bombs raining on our heads.

2. I am not a prisoner held in solitary confinement, as millions are.

3. I am not a refugee trying to escape with my life.

4. I am not standing in line waiting to fill a pot of water.

5. I have access to fresh food and I’m not starving.

6. I have hot running water.

7. My country has not been ruined by years of war.

8. I can reach my friends by phone and check in on them.

9. My friends and family check in on me because they care about me.

10. Any whiplash I feel about this strange turn of events is itself a sign of privilege.

11. More than half of the world would gladly trade their everyday problems for the modest inconveniences I am experiencing.

12. I may have anxious dreams but I’m dreaming them on a proper bed and I’m not sleeping on the sidewalk.

13. By staying at home, I’m helping the planet rest.

14. As long as I have my mind I can create, imagine, dream and not be lonely.

15. This global crisis connects me to people around the world and reminds me of our common humanity. This is a good thing.

16. When something tragic happens to another country next time, I will respond to it with humility and recognition.

17. I will fight for positive changes and economically just policies in my own country.

20. The trees have already begun to bloom.

It is indeed worth sitting and thinking on…I am especially grateful for #18.

I don’t blame you, I would’ve had to have gotten up and changed the channel, too.

And thus ends another day for me.  I have my to do list cut out for me.  Placate Mother Nature, get ahold of The Tooth Fairy for Leah, and a bunch of other stuff.

Love and happiness to you all.

Leave a Reply to A. Sasquatch Cancel reply