I hope this is finding you all well on this fine Saturday morning.  It’s been a tough week for me.

Since we spoke last, the Whelpling has been in and out of the hospital twice and is now recovering at home.  We don’t need to talk about his incapacitation other than to say he is still currently “under the weather” and could use your prayers and best wishes.

On the flip side, I’m the proud owner of two of his three kidlets.  They are staying at Impish Dragon Cavern for the next week.  We will be kidnapping the third one tomorrow.  That way we will have completed the whole set.

You’ll be happy to know that we have put the two of them to work in the DL & LL Enterprises Genetically Modified Farming Complex.

Here they are after having worked the day in the corn radiation experimentation laboratory. 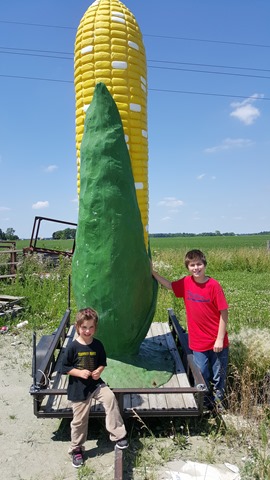 Anyway, with everything else going on, I’m also working today (Saturday).  So, I’ll leave you with these exemplary words:

You know, the Summer Olympics are coming up in Rio.  With that in mind, it was very timely when I got this History Lesson from one of our long time readers and contributors.

2500 years ago a slave call girl from Sardinia named Gedophamee (pronounced Get-offa’-me) was attending a great athletic festival in Greece. This festival had no name.

In those days the athletes performed naked (believe it or not).

To prevent unwanted arousal while competing, the men imbibed freely on drink containing saltpeter before and throughout the variety of events.

At the opening ceremonial parade, Gedophamee observed the first wave of naked athletic males marching toward her and she exclaimed:  “Oh! Limp pricks!”   Over the next two and a half millennia that expression morphed into  “Olympics” .   Just thought I’d share this new found knowledge with you.

Thanks for that timely history lesson, Karl

Here’s a great quote from the Owl about working for the mouse at Disney:

“Like working blindfolded in a mine field with Tigger!” 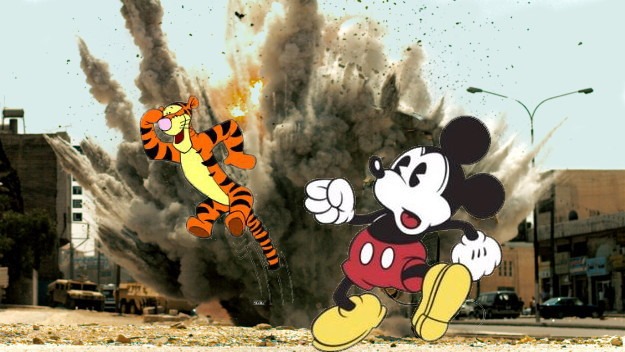 Just read this essay this morning (Tuesday) sent in to us by our dear friend and fellow camper Jeannie.  I have redacted one item, which will become obvious to you as you read because I’ll make it so, because I will not allow that filthy, cowardly terrorist’s name to appear in my ezine.  He will be henceforth known as scumbag.

A poll came out the other day that shows just how divided the country is now. A slim majority of Americans believe scumbag’s attack in Orlando was a terrorist act. An overwhelming majority of Republicans think so. But an overwhelming majority of Democrats do not see it as a terrorist attack, but rather as just a mass shooting. (Sorry, but you can’t say “just” and “mass shooting” in the same sentence!) In the spirit of never letting a crisis go to waste, the Obama Administration is seizing on this data to rewrite history and make scumbag a useful soldier in the war against guns.

On Meet the Press, Attorney General Lynch announced that the 911 transcript of scumbag’s call would be edited to delete all references to Islamic terror. She claims, “What we’re not going to do is further proclaim this man’s coward’s pledges of allegiance to terrorist groups, and further his propaganda.” What she really wants to do is alter history, redacting the terrorist’s own claims, in order to make this just (there it is again, “just”) a shooting and not a terrorist attack.

So history must be altered. The transcripts must be edited. This administration will not let a crisis go to waste. Their claim is that they don’t want to further scumbag’s propaganda. Really, they want to use scumbag to further their own propaganda. This administration has a history of denying terrorist attacks are actually terrorist attacks. This will be another one conveniently memory holed and altered to fit Obama’s own purposes.

Hope and Change.  I hope I can spin this the way I want to and I will change history to suit my own personal agenda.
That’s the hope and change we got, fellow campers, why are we just sitting here letting them get away with it? 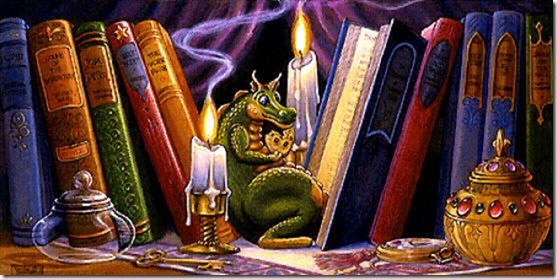 Another Spangler and one of my favorites.  Gotta love the play of the books, the tiny dragon and the chocolate chip cookies.  In other pictures, he also features cats that are bigger than the dragons…like this one:

A woman called our airline customer-service desk asking if she could take her dog on board.

“Sure,” I said, “as long as you provide your own kennel.”

I further explained that the kennel needed to be large enough for the dog to stand up, sit down, turn around, and roll over.

The customer was flummoxed: “I’ll never be able to teach him all of that by tomorrow!”

Okay, I’ve been hit with so much political stuff today (Tuesday) I have to jump into this before I get overwhelmed 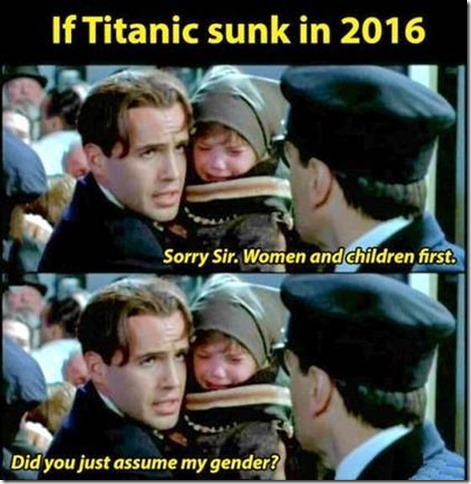 IF even the Brits don’t like him, then no body should.

AMEN!!!!!  Let some guy follow my wife or daughter into the bathroom and him and I will both be going to the hospital.  But, I’ll just be going to get my boot back from out of his ass! 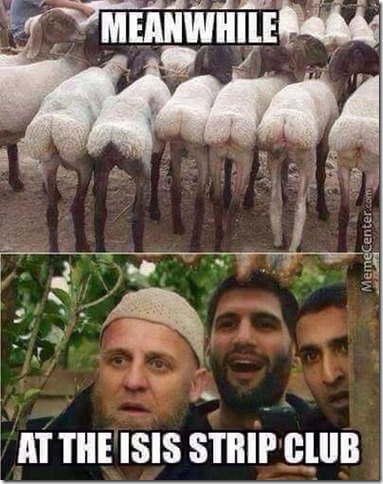 No more is needed to be said here.

OKay, one more for luck: 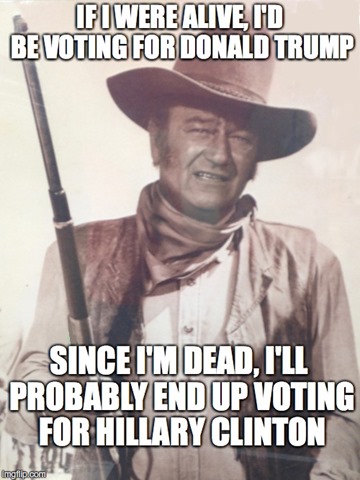 A woman goes into a bar with a duck under her arm.
The bartender says, “What’ll the pig have?”
The woman says, “that’s not a pig, that’s a duck!”.
“I know,” says the bartender, “I was talking to the duck.” 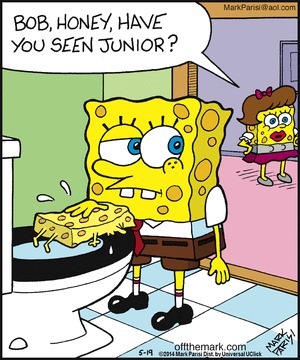 There really needs no explanation for this one.  It is just a really cool looking city that Lethal and I are considering investing in.

We’ve got some really funny ones today.  Watch and laugh.
Jim Gaffigan on CAKE!!!  Way funny~

Wow, this is one incredible trained dog video!  Thanks to 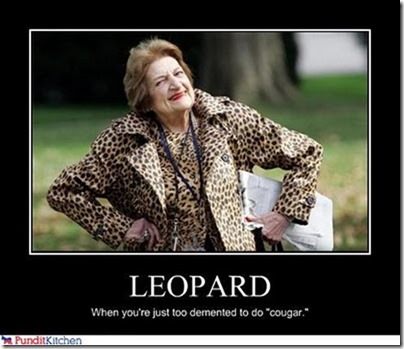 I’m sure that last one didn’t mean a lot to some of you, but the rest of you who get it are laughing like crazy right now.

Finally, today’s Last Word is a great essay by the Common Constitutionalist, a blog that we’ve featured before right here.  I hope you enjoy it.

Thank Heavens for the Bill of Rights

June 23, 2016By the Common Constitutionalist

by: the Common Constitutionalist

The Republicans in the Senate do occasionally find their backbones and were able to display them as they rejected four pieces of anti-gun legislation. Thank you Republicans and thank you founders for giving us the Bill of Rights.

Given the current state of the federal leviathan, imagine the condition of our individual and states’ rights without the specific declaration of those protections against federal intrusion. Turns out the anti-federalists were right to insist on a Bill of Rights!

We would have no right to own or carry a weapon of any kind without the language expressed in the Second Amendment. We on the right would have nothing specific to argue against the gun-grabbers of the left. For decades we have debated the language and meaning of the Second Amendment, but without it, our argument would be relegated to the abstract, for nowhere else does the Constitution specifically address this right. Given the nature of today’s courts – that would not be nearly enough. Thanks to George Mason and the anti-federalists, we at least have the Amendment specifying this natural right.

Our freedom of speech, assembly, religion, etc. would all be substantially abridged, if not for the First Amendment. We would have virtually no states’ rights left without the Tenth – and so on.

But at the time of our nations founding, federalists argued that there was simply no need to compile a list of natural rights already bestowed upon them by God. After all, these were rights free men were supposed to already have, so what would be the point in listing them. And what if they forgot one or more? This might be more detrimental than having no Bill of Rights at all. Also, they surmised – most states already had a Bill of Rights. This, the federalists thought, was more than sufficient. They were wrong.

As long as men continued to be of good character, there was no fear of the federal government infringing on the states or the

individual. It was understood that any power not specified in the Constitution was to revert back to the States and the people. It was so obvious to the federalists; it shouldn’t have been needed to be spelled out.

Ostensibly lead by the great George Mason of Virginia, the anti-federalists were dead set against ratification of the Constitution without a specific Bill of Rights protecting the states and citizens from federal encroachment. So adamant was Mason that he refused to sign the document, despite a promise made by James Madison to add a bill of rights in the first congress. He was one of only three not to sign. Another was Elbridge Gerry, who was generally cranking and against most everything. The third might be considered America’s first moderate – Edmond Randolph – who was spineless and afraid to be associated with something which might fail.

A promise is a promise – at least it was back then – and after Madison was elected to first the Congress, they took up the various state (anti-federalist) concerns. The first draft, as it were, of this Bill of Rights, contained 17 articles. Most made it through to the second draft and were then modified and combined to form the final draft of 10 amendments, or the Bill of Rights.

One they should have kept from the first draft (it was dumped in the second draft) was Article 16, which stated:

This would sure come in handy – as today’s federal judges write laws, Congress and the Senate willingly relinquish their authority to the President and Obama acts as if he is the embodiment of all three branches.

Lest anyone, or everyone, on the left mistakenly think that the Bill of Rights are indeed rights bestowed upon us by the national or federal government – think again. As I have said countless times before – it one wishes to know what the founders meant – read their own words. They were pretty clear-thinking and concise authors.

Of the Bill of Rights, Alexander Hamilton wrote:

“The sacred rights of mankind are not to be rummaged for, among old parchments, or musty records. They are written, as with a sun beam in the whole volume of human nature, by the hand of the divinity itself; and can never be erased or obscured by mortal power.”

Sums it up rather nicely – doesn’t it.

I couldn’t have said it better myself.