Well, it’s been one of those weeks again.  All of us have been to the dentist and all three of us have crappy teeth.  Well yeah.  Add it to the list.

At least we aren’t drowning again like they are in Houston, Lethal’s stomping ground.  I’m on text message with him right now (right now being Friday afternoon) and he says that not only is it flooding there, but the power is out again.

I told him that the only explanation is that he’s pissed off Mother Nature again.

I’ve got a different idea.  She’s mad at you and taking it out on me.

HOW DOES THIS END UP BEING MY FAULT!?!?

I’m not sure yet.  Bet your ass I’m going to figure it out, though. I’ve done and said nothing to her.  Even complemented her on her spring wild flowers.

I’ve had NO interaction with her or any of her minions at all.

You shit in her wild flower fields again?

Are you sure?  No Mother Nature Mother-in-Law comparisons?

OHH!  NOW I UNDERSTAND! It IS all your fault!  I know what she’s pissed about.  She was not wished Happy Mother’s Day OR Happy Earth Day!  Earth Day is always a Saturday and Mother’s Day was your responsibility.  Hence it’s your fault she’s mad and passing it on to me.

Hold on, I’m checking my records.  I’m SURE I sent her a card.

I’m blaming you because you’re always late to the deadline and we don’t have time to double check or edit, just rush to the presses.

Terrance said he mailed out all the Mother’s Day Cards!

I’ve got to go.  I’ve gotta go find some place that’s lightning proof!  As soon as she realizes where I am, I’m screwed!

Campers, I’m sorry.  I gotta go.  You guys go ahead and get started and I’ll catch up later. 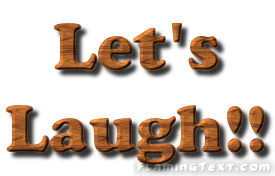 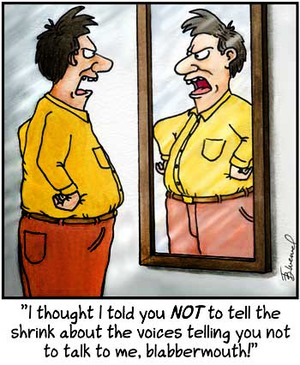 The Oliver and Eggleston Funeral Home of Farmville, Virginia, began offering drive-through casket viewing for mourners of the deceased. It’s a perfect idea for today’s America. You drive up to the first window, view the body, then you drive up to the second window, pick up your fries and leave. 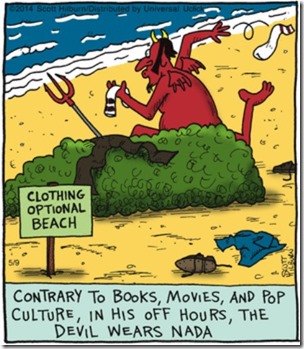 Phil Mickelson apologized for his million dollar fine by the Securities and Exchange Commission for insider trading and vowed to be more careful who he hangs out with. It’s tough. Four white guys can’t tee off together at a private golf club without the Obama Justice Department smelling a rat.

Another Spangler and another one of my favorites.

I get truly annoyed when someone tries to make me feel bad about something that I can’t possibly have anything to do with.  I’m sorry, but I don’t feel sorry for any people that were slaves.  The operative word being WERE.  It was a horrible practice that almost EVERY race partook in.  Yes, there were even free black Americans who, prior to the Civil War, owned other blacks as slaves.  I never owned slaves, so why are so many people trying to make me feel guilty for being a white male?

Well, part of the problem is that our “First Family” continue to foster racism in a country that was well on their way to ridding ourselves of that nasty thought process.  And I don’t know about you, but I’m sick and damn tired of it. 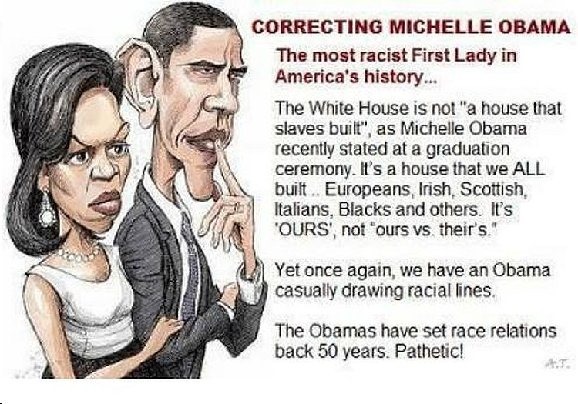 What possible reason, other than her wanting to continue the racist program that we’ve tried to rid ourselves of for so long, could she possibly have for bringing such bullshit up at a graduation ceremony?  I’m sick of it.  These people are not MY first family.  Their morals and their politics are shameful and I will not claim them as my own.

I Think My Dog’s a Democrat by Bryan Lewis

Okay, so I get it.  That last cartoon was just plain silly.  But what do you expect from zombie humor?

Venezuelan protesters marched on the presidential palace to demand food Friday because the government can’t fill the store shelves. It’s not a good ad for socialism. You’d think a country that produces oil, cocaine and coffee could live off the United States like a millenial in the family basement.

So, I’m beginning to think that my Dragon Pix and my Fantasy Pix aren’t really going over like they used to.
No, I’m not going to stop them, I am just making an observation.
LOL!
So, yes, I’m just being silly… then tell me what you think? 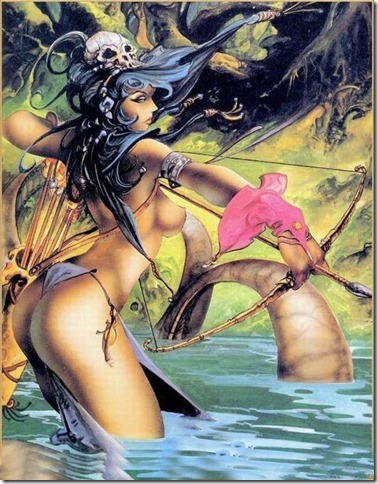 Ginny, at our last Halloween Party. 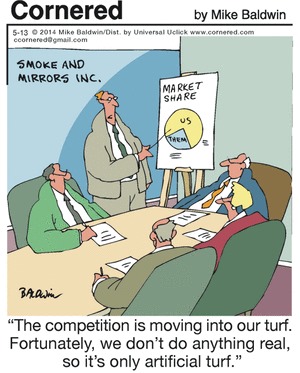 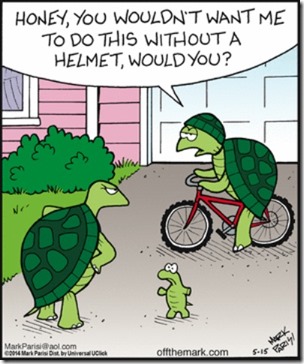 This next cartoon, really a political cartoon, almost made me cry in its truthfulness.  This is a problem we ALL need to work on.

Please, don’t let it be that way for you.  Lethal and I will do our very best to remind everyone of just how important our veterans are, but we can’t do it alone.  We need your help too.

Ex President Clinton finishes his time on earth and approaches the Pearly Gates of Heaven. “And who might you be?” inquires St. Peter.
“It’s me, Bill Clinton, formerly the President of the United States and Leader of the Free World.” “Oh….Mr. President!
What may I do for you?” asks St. Peter. “I’d like to come in,” replies Clinton. “Sure,” says the Saint. “But first you have to confess your sins.
What bad things have you done in your life?”
Clinton bites his lip and answers, “Well, I tried marijuana, but you can’t call it ‘dope-smoking’ because I didn’t inhale.
There were inappropriate extramarital relationships, but you can’t call it ‘adultery’ because I didn’t have full ‘sexual relations.’
And I made some statements that were misleading, but legally accurate, but you can’t call it ‘bearing false witness’ because,
as far as I know, it didn’t meet the legal standard of perjury.”
With that St. Peter consults the Book of Life briefly, and declares, “Okay, here’s the deal. We’ll send you somewhere hot, but we won’t call it ‘Hell.’
You’ll be there indefinitely, but we won’t call it ‘eternity.’
And when you enter, you don’t have to “abandon all hope,” just don’t hold your breath… waiting for it to freeze over.” 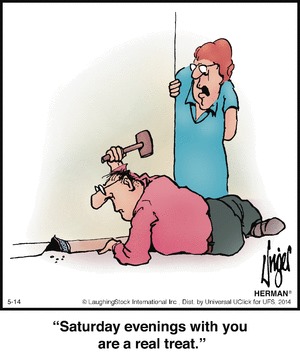 How do you settle a presidential election when the vote is too close to call?

With an ice fishing contest, of course!

After the votes were counted, Hillary Clinton and Donald Trump were deadlocked.

Instead of going through a recount, the two agreed to a week-long ice fishing contest to settle the election.

Whoever caught the most fish at the end of the week would be the President.

The candidates decided a remote frozen lake in northern Wisconsin would be the ideal place.

No observers were allowed on the fishing rounds, but both candidates would need to have their catches verified and counted each night at 5 PM.

After Day 1, Trump returned with a total of 10 fish, Hillary came back with nothing.

Day 2 finished, and Trump caught another 20 fish, but Hillary once again came back with nothing!

That night, Hillary and her cronies got together and accused Trump of being a “low-life cheater.”

Instead of fishing on Day 3, they were just going to follow Trump to spy on him and figure out how he was cheating.

Day 3 finished up and Trump had an incredible day, adding 50 fish to his total!

That night, Hillary and her democratic buddies got together for the full report on how Donald was cheating.

Hillary stood up to give her report and said, “You are not going to believe this, he’s cutting holes in the ice!”

And that, my friends, tells you all you need to know. 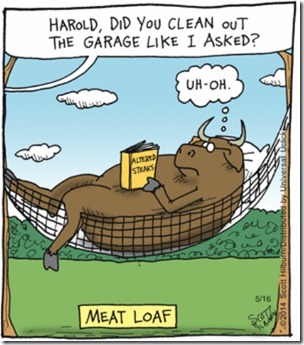 You guys have read stuff from my buddy Wheats before.  Well, here he is again with another great essay:

Will historians in 4016 study the fall of the United States the way they study the fall of Rome today?
Will they compare the world stage as being a larger version of what happened to SPQR?
I’m pretty sure that the current system of year dates will no longer exist…and islam may indeed rule for some time. Not that I hope for that but it’s a distinct possibility. The Huns, the Ottomans, The dynasties of China, etc. Only this time, it’s the entire planet.
From where I sit, I see it as an internal failure of our nation. One that bored itself into the brainstem and ate it….Some higher functions still work but without autonomic activity, they are misdirected and lost.
The nation dies without the automatic nature of real justice, real fairness and accountability. We’re seeing now what happens to a nation that cannot police itself properly due to dysfunction of the system.
Demetrius could certainly recognize the damage done by Caligula and Nero as Rush, Hannity and others recognize the damage done by Clinton and Obama but he was equally helpless to do anything about it; Probably why he was affixed with the moniker “Demitrius The Cynic”.
Perhaps it’s just another chapter in the story of the Human Condition whereby it cycles through enlightenment, tyranny, destruction, enlightenment again. In the last 100 to 200 years much has been written and said about the inherent corruption of humankind and perhaps it’s irreparable.
Interesting times, indeed. All I know is that the world never stops turning and someday, the sun will burn out. The former is not entirely true, either as it is dependent on the latter’s existence.
Maybe….just maybe…FTL travel will be discovered by some as yet unknown science and mathematics and humans can continue on and try to improve.
One theory I’ve held is that there are other civilizations on other worlds but God put us here, on Earth because we’re the mistake; The accident that wasn’t cooked properly or long enough. Our flaws are irreversible but someplace out there, there are civilizations where people who look like us are always honest, never suffer from the vices that we have. In all respects, truly virtuous. That’s my (odd) supposition. But we’re here on Earth and have to do what we can to make it work.
Maybe someday we’ll know why.