And what a wonderful morning it is, too!  It’s threatening rain, the base is having it’s

annual family day (read “picnic” or “BBQ”) and I’m running the Emergency Communications Center and teaching a class in the middle of all that!

Tune in later on in the issue, if I can somehow find the time, and I’ll give you an idea of how incredibly wonderful my whole WEEK has been.

And yes, before you ask, THAT should have ALSO been in the, yet to be invented, “Sarcasm” Font.

Yeah, that didn’t work out so well.  Bastard probably didn’t want anyone to scratch his ride.

As a Bagpiper, I play many gigs. Recently I was asked by a funeral director to play at a graveside service for a homeless man. He had no family or friends, so the service was to be at a pauper’s cemetery in the Nova Scotia back country.
As I was not familiar with the backwoods, I got lost and, being a typical man, I didn’t stop for directions.
I finally arrived an hour late and saw the funeral guy had evidently gone and the hearse was nowhere in sight. There were only the diggers and crew left and they were eating lunch. I felt badly and apologized to the men for being late. I went to the side of the grave and looked down and the vault lid was already in place. I didn’t know what else to do, so I started to play.
The workers put down their lunches and began to gather around. I played out my heart and soul for this man with no family and friends. I played like I’ve never played before for this homeless man. And as I played “Amazing Grace”, the workers began to weep. They wept, I wept, we all wept together. When I finished, I packed up my bagpipes and started for my car. Though my head was hung low, my heart was full.
As I opened the door to my car, I heard one of the workers say, “I never seen nothing like that before and I’ve been putting in septic tanks for twenty years.”
Apparently I’m still lost….it’s a man thing.

Time is a river – You cannot touch the same water twice, because the flow that has passed will never pass again.  Enjoy every moment of life.

Yesterday, Friday, June 2nd, was National Doughnut Day!  Needless to say, I was a little busy.

I said to the store manager and consequently, the police officer whom he called.  Absolutely no sense at all!  I won’t go so far as to say the name of the grocery store, due to possible legal issue with a still “possibly” pending lawsuit, but I’ll bet if you look around a little you can probably figure it out.

National Doughnut Day started in 1938 as a fund raiser for Chicago‘s The Salvation Army. Their goal was to help those in need during the Great Depression, and to honor The Salvation Army “Lassies” of World War I, who served doughnuts to soldiers.

Soon after the US entrance into World War I in 1917, The Salvation Army sent a fact-finding mission to France. The mission concluded that the needs of US enlisted men could be met by canteens/social centers termed “huts” that could serve baked goods, provide writing supplies and stamps, and provide a clothes-mending service. Typically, six staff members per hut would include four female volunteers who could “mother” the boys. These huts were established by The Salvation Army in the United States near army training centers.

About 250 Salvation Army volunteers went to France. Because of the difficulties of providing freshly baked goods from huts established in abandoned buildings near to the front lines, the two Salvation Army volunteers (Ensign Margaret Sheldon and Adjutant Helen Purviance) came up with the idea of providing doughnuts. These are reported to have been an “instant hit”, and “soon many soldiers were visiting The Salvation Army huts”. Margaret Sheldon wrote of one busy day: “Today I made 22 pies, 300 doughnuts, 700 cups of coffee.”

Soon, the women who did this work became known by the servicemen as “Doughnut Girls”.[6] 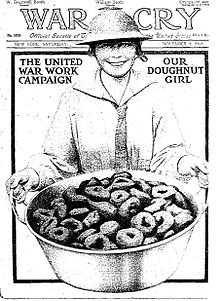 Doughnut Dollies were women volunteers of the Salvation Army, who traveled to France in 1918 to support US soldiers

A misconception has taken hold that the provision of doughnuts to US enlisted men in World War I is the origin of the term “doughboy” to describe US infantry. But, the term was in use as early as the Mexican-American War of 1846–47.

In Chicago and other cities, National Doughnut Day is still a fundraiser for The Salvation Army. In 2017, the organization joined with Russ’s Market, Super Saver, LaMar’s Donuts, Hurts Donuts and Krispy Kreme in Lincoln, Nebraska to raise funds on National Doughnut Day.

In the Second World War, Red Cross Volunteers also distributed doughnuts, and it became routine to refer to the Red Cross girls as Doughnut Dollies as well.

The birthday of the United States Marine Corps was once referred to as National Donut Day, in a successful ruse by American prisoners of war at Son Tay prison camp to trick the North Vietnamese into giving out donuts in honor of the occasion.

Wow!  Now THAT was some interesting information on Doughnut Day.  So, I guess you have to be being shot at in order to get free doughnuts!  And then you only get them from the Salvation Army or the Red Cross.  Now THAT sucks!

Okay, so that’s a really good question!  What the hell people?  The amount of money

that you put into those spikes for all your different locations, you could have built inexpensive housing for some of the homeless…especially some of the homeless vets that are out there.  Just like the point that instead of sending money to other countries who hate us, how about spending that money right here on people who love us!!!!  What kind of sense does that make?  Why do we have men and women who have served our country, went places and did things that no sane human being would EVER do on purpose, and made it back home only to be living in a cardboard box (and that’s if their lucky!)?  THAT IS NOT RIGHT!

Okay, so time to kick that soap box back under the counter.

Okay, I’m rapidly running out of time, and for that I’m very sorry, but I want to give you this other article from the Washington Post on National Donut Day because it’s got some really cool information on it.

A century ago, not long after the United States entered World War I, the Salvation Army deployed hundreds of volunteers to France to soothe and bolster American troops.

The men were homesick. They were hungry. They wanted a slice of apple pie.

But that, of course, was impossible. The many indignities of war include this undeniable one: A fox hole is a terrible place to bake.

So the Salvation Army troops improvised, frying dough in soldier helmets, producing such delicious doughnuts that when the war was over, when the troops finally came home, the government produced a guide for veterans to open doughnut shops.

This is how the doughnut came to America. This is what led to National Doughnut Day. This is why the line at Dunkin’ Donuts was extra long on a recent Friday morning — free doughnuts, not as a marketing ploy (well, maybe a little), but to remember the sacrifices those men made and the Salvation Army volunteers who comforted them.

[The U.S. joined the ‘Great War’ 100 years ago. America and warfare were never the same.]

“As they dipped doughnuts for their boys, they dispensed motherhood,” John T. Edge wrote in “Donuts: An American Passion,” a seminal volume in the genre of historic deliciousness.

The recipe called for:

The most important instruction: “Dust with powdered sugar. Let cool and enjoy.”

Edge, a food historian (what a gig!), identified three important rounds in the popularization of doughnuts. The first was the Salvation Army effort.

“By the close of World War I, the Salvation Army was among the strongest charitable forces in America,” Edge wrote, “and their chosen totem, the doughnut, was an ingrained symbol of home.”

The second was the invention of — the following words are completely true — the Wonderful Almost Human Doughnut Machine, invented by Adolph Levitt, a Jewish immigrant from Eastern Europe.

“When filled with his proprietary dough mix, it cranked out hundreds of perfectly round doughnuts per hour,” Edge wrote. “Placed in a window for all to see, the machine stopped traffic in Times Square.”

Let us pause to consider whether any other food has stopped traffic at The Crossroads of the World.

Anyway, there’s one more round — the third. Edge calls this one “glamour.” It takes place during the Great Depression. By this time, doughnuts are an industry — not big and important like, say, steel, but important. And tasty.

“As the nation slid into economic depression, the industry feared that doughnuts might go the way of the street corner apple,” Edge writes. “So they aligned themselves with America’s emerging aristocracy, the ladies and gentlemen of Hollywood.”

Frank Capra put doughnuts in his movies. There’s that scene in “It Happened One Night” where Clark Gable teaches, as Edge puts it, “doughnut etiquette.” On Shirley Temple’s list of works is this: “Dora’s Dunking Donuts.” Laurel and Hardy posed for photos holding doughnuts.

And you know what?

While their nutritional value is questionable, their patriotic value is as certain as the round hole at their center, through which eaters can look back through time and see not just food history, but the story of America — of our soldiers fighting for what’s right, fueled by what would become the country’s favorite pastry.

I’m sorry my friends, but it’s late and I do have to work tomorrow.  God Bless you all.